Crash leaves way clear for Marquez in the MotoGP 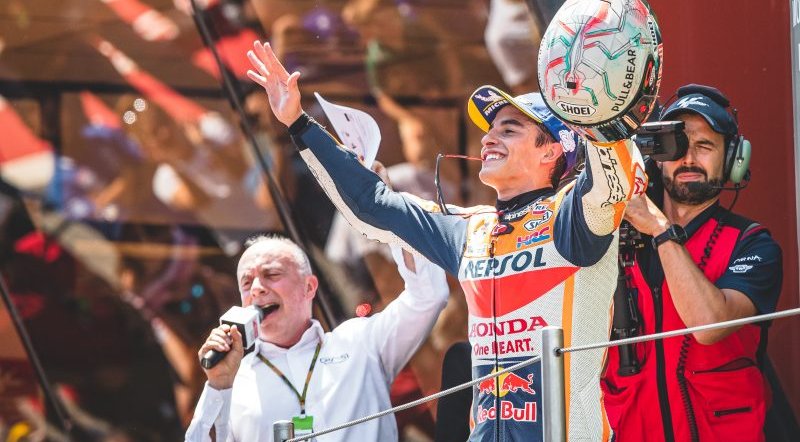 MARC Marquez has extended his lead in the MotoGP rankings after team mate Jorge Lorenzo crashed, taking out a slew of top riders on lap two in Barcelona.

Lorenzo had made a blistering start, moving up from 10th on the grid to fourth. But he came in too hot on turn 10 as he tried to overtake Maveric Viñales while Marquez made a move on race leader and main championship challenger Andrea Dovizioso.

Lorenzo ended up taking out Dovizioso with Viñales also falling after being left nowhere to go. Valentino Rossi became another victim of the crash when he ran wide after braking late and got caught in the incident.

The end result was that Marquez was left a clear run to the flag in his home GP in Catalonia, finishing 2.66 seconds ahead of second placed Fabio Quartararo, with Danilo Petrucci third and Alex Rins fourth.

This was the reigning MotoGP World Champion’s second premier class win in Barcelona and his fourth of the 2019 season.

The victory is Marquez’s 48th in the premier class and helps to extend his championship lead to 37 points over Dovizioso. Honda holds a 15 points advantage over Ducati in the Constructor Championship.

Speaking about his crash Lorenzo said: “You don’t have any options if you brake a little bit too late here, like happened with me. It was my fault, my mistake and I apologise. It was really unfortunate to take out Dovi, Maverick and Valentino – it wasn’t their fault obviously, it was mine.

“The only thing that matters today is the crash, I took out three riders unfortunately but if we think aside from this it was a weekend where we were able to make a step forward and I was consistent throughout.”

Marc Marquez said: “I chose the soft rear to try and push in the beginning and to try to not overheat the tyre but to try to be constant and fast. All of the Repsol Honda Team did a really good job this weekend; we worked hard and prepared well for the race.

“The team told me something had happened to Dovi, so I just kept pushing and focusing on my own race. We had the perfect strategy regardless and I want to thank all the fans who came out. Gracias!

“It’s always special when you can celebrate winning together with your brother, Alex rode well this weekend!”
Marquez junior had indeed ridden well to take his third Moto2 win of the season and the championship lead after pre-race title leader Lorenzo Baldassarri crashed out.

The teams remained a few days in Barcelona for testing. MotoGP will resume at Assen (The Netherlands) on the weekend of June 28 – 30.