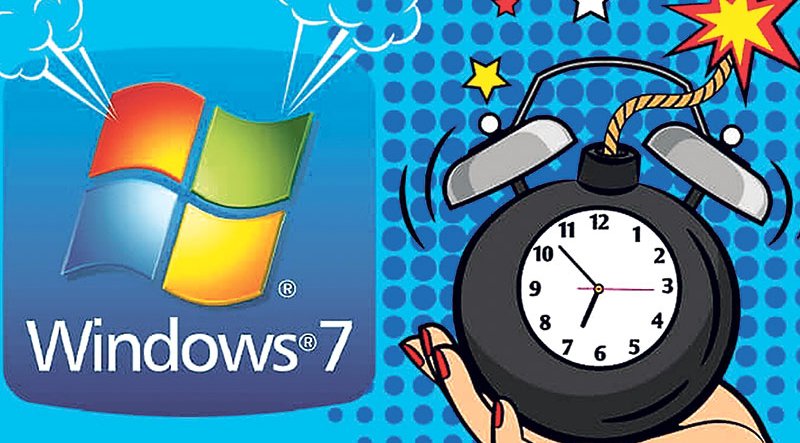 Will a third of the world’s PCs simply stop in January, asks Terence Kennedy

MY wife’s venerable laptop is under bombardment right now, and the perpetrator is Microsoft. The reason: she’s clinging onto the ‘obsolete’ Windows 7.

Read their dire warnings and you could easily believe her computing world will implode when Windows 7 ‘expires’ a few months from now. It will be no more, cease to be, ex-Windows.

That’s radical talk, given that a third of the world’s users still swear by what many believe was Microsoft’s best-ever operating system. Surely they can’t just flick the switch on January 14?

They can’t, and they won’t. What they will do is simply freeze Windows 7 in time from that date. No more patches, updates, bug fixes, security solutions.

If that doesn’t bother you, you can indeed keep using it forever, or at least until the computer itself dies. At which stage you will be unable to activate it again on another machine even if you’ve got handfuls of kosher serial numbers, tough luck.

Microsoft has had a hard sell trying to move users to the all-singing, all-dancing Windows 10, the final number in the progression as 10 now just keeps getting updated and improved forever more.

They have managed to persuade 56 per cent of us to move to Windows 10, at the latest count. But a stubborn 33 per cent swear by 7, and then there are the oddball diehards: 6 per cent on the dog’s dinner which was Windows 8, half a per cent still on the truly terrible Vista, and a luddite 1.6 per cent clinging on to the ancient XP for dear life. Including Britain’s good old NHS, bless their cotton swabs.

In many cases you can’t upgrade because your hardware simply won’t handle it.

If you remember Microsoft’s kind offer of a free migration from 7 to 10, that boat sailed a long time ago. Last time I looked it costs about a hundred smackers to make the move. Or for not much more you could buy a cheap computer with 10 pre-installed.

The gloom and doom scenario for sticking with 7 is that if an unpatched vulnerability is found (at this late stage, really?), hackers will exploit it, and Microsoft won’t fix it.

But your anti-virus program (you do have one, don’t you?) will keep updating to keep you safe, and many of your other apps like browsers, e-mail and office suite, can continue to be updated (‘patched’ in the jargon) in the usual way.

So: like the famous Mark Twain quote, rumours of Windows 7’s death have been greatly exaggerated. Happy obsolescence.

IF you’re feeling besieged by Microsoft’s warnings, ask yourself how long you expect your computer to last.

Most PCs pre-installed with Windows 7 will be between seven and 10 years old. That’s a pretty good run in an era when technology can have the life of a geriatric fruit-fly.

Actually buying Windows 10 retail is pretty bad value, given that manufacturers of new computers pay Microsoft just a fraction of that price to pre-install it on their machines.

There is another route. Join me in the shadows and I’ll tell you.

You could take your chance buying an ‘OEM’ (factory-install) copy for €10 or up, openly on offer from plenty of absolutely legit sites like Amazon.

I have, I did, and they worked. Mostly.