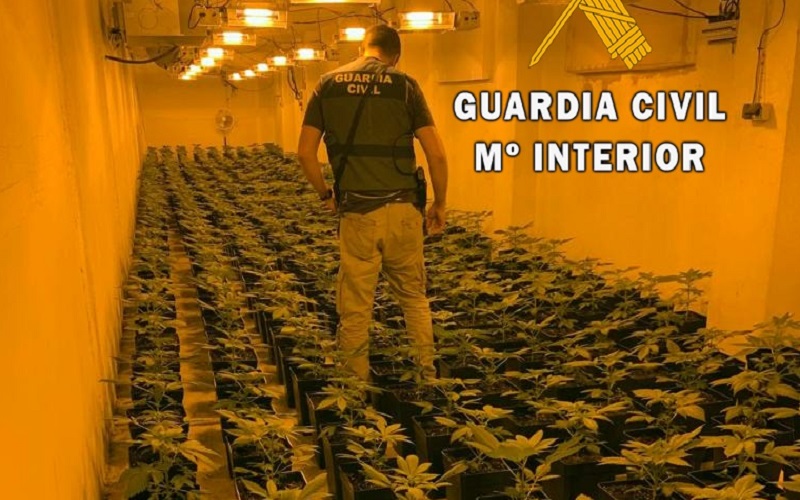 POLICE and Guardia Civil have dug up a fresh crop of illegal marijuana plantations in recent weeks.
In Ejido police dismantled a setup in a house in Calle Caceras and arrested the 30-year old owner. There were 365 marijuana plants at various stages of development and drying in the basement, along with the usual type of equipment used for plantations of this kind: halogen lamps, ventilators, air-conditioning units, and the like.
Also typical was how police learned about the possible existence of the marijuana production operation.
A number of local residents voiced their suspicions the property was being used to cultivate the drug given the strong smell of marijuana stemming from a pipe on the roof terrace.
Investigations confirmed neighbours’ reports, and revealed there was an unauthorized connection to the electricity network.
A Guardia Civil operation in Berja led to the arrest of a man and a woman for growing marijuana in two rooms of a house and on the patio and for illegally connecting to the power supply. When officers went into the property they found the drug already picked and drying, along with marijuana buds. They also found three compressed air rifles, pellets and a knife.
In a second operation in the same town officers came across 125 marijuana plants, 21 of them already dried, and an unauthorised hook up to the electricity. They detained the man living in the property with his girlfriend and young son.
The operation reaping the highest marijuana plant count was in nearby Adra. A Guardia investigation resulted in the location of a warehouse containing 900, along with yet another illegal electricity connection.
In this case it was to power a highly sophisticated automated energy and security system.
Officers surprised two individuals looking after the plantation when they raided the warehouse. Both are under arrest, along with a third person detained later the same day who had been seen coming and going from the warehouse on a number of other occasions.
CAPTION: LATEST FINDS: Guardia Civil discovered 900 marijuana plants in a warehouse in Adra
CREDIT: Almeria Guardia Civil