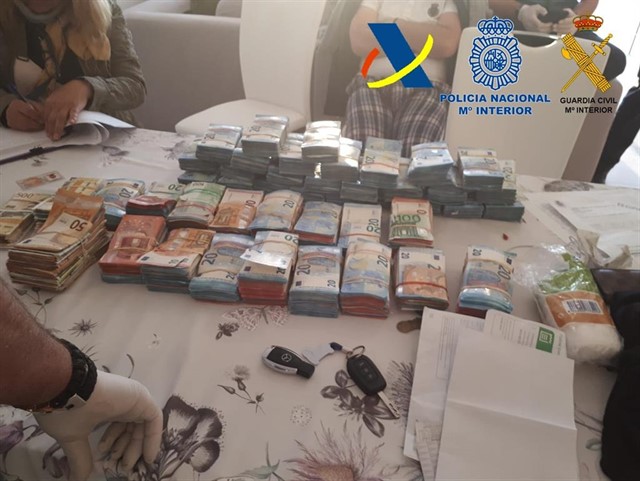 TWENTY three suspects are under arrest as part of a major investigation into an international hashish trafficking network operating in Almeria and Seville, among other areas.
Most of the detentions were in Spain; one of the arrests was in the Dominican Republic and two were in Morocco.
Another four individuals in the Caribbean island are under investigation in the operation involving National Police, Guardia Civil and the Tax Agency, and with the collaboration of the Moroccan and Dominican police and judicial authorities.
Twenty properties with a combined value of €2 million have been embargoed as part of the operation. In addition, the authorities have seized €3.5 million in cash, eight top-of-the-range vehicles and 16,000 kilos of hashish.
Charges levelled against the suspects include crimes against public health, illegal possession of arms and money laundering.
The operation was first launched back in 2017 when more than €300,000 in €20 and €50 notes was found in a luxury vehicle owned by a French citizen with a record for drug trafficking. Working together, the Spanish and Moroccan authorities connected the Frenchman with the leaders of an organisation uncovered earlier in the year following the seizure of 7,400 kilos of hash on the border between Western Sahara and Mauritania which was destined to be transported to Spain through agricultural product import businesses.
Investigators established they were dealing with an international, highly structured network dedicated to trafficking large amounts of the drug into this country via lorries and transport companies.
As the investigations progressed the authorities developed the theory the drug trafficking profits were being laundered in the Caribbean after seizing a suitcases destined for the Dominican Republic in which there was hidden €165,000.
In April last year the investigation resulted in the seizure of a lorry in Almeria, supposedly transporting ceramic tiles, but which was carrying 7,200 kilos of hash and €177,000 in cash.
It was the latest in a series of hits against the network which prompted the criminals to try and get their illegal profits out the country.
Shortly after this, and in collaboration with the Dominican National Drug Control Agency and the US Anti-Drug Department, a container was opened in which there was hidden more than €690,000. In July last year, the authorities came across a shipment of 1,350 kilos of hash in  a Seville industrial estate, and at the beginning of November one of the mules who took consignments from Moroccan producers to network members in Spain was intercepted with €85,000.
The large amount of documentation seized combined with the complexity of the international financial structure the trafficking ring had established to launder cash meant it wasn’t until May this year that the authorities raided 12 properties in Spain and five in the Dominican Republic.
The organisation head is among those now under arrest.