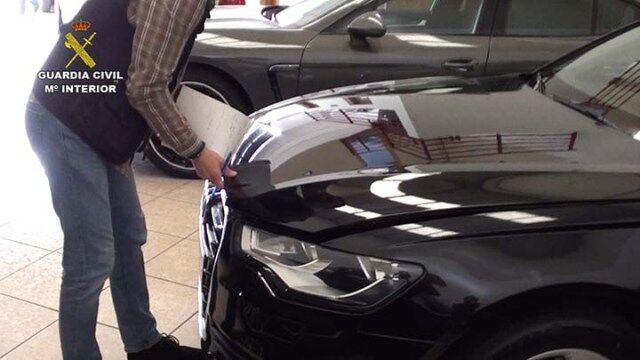 FORTY-TWO arrested and 45 high-end vehicles worth €1,450,000 have been recovered by Guardia Civil on an operation against a sophisticated vehicle fraud ring.

The gang illegally obtained the cars from legitimate dealers in Austria through leasing contracts and immediately transferred them to Spain. Once here they ‘legalised’ them and put them up for sale.

Those arrested, some in international arrest and extradition orders, have been charged with fraud, handling stolen goods, misappropriation of vehicles, forgery of public documents, forgery of private documents and membership of a criminal organisation.

The operation began after routine inspections at different ITV stations found an unusual increase in vehicles from Austria that were undergoing inspections for transfers to Spanish documentation.

Durter investigation found that one of the vehicles being registered in Spain had been stolen in Austria, so an exhaustive analysis of the ITV files of the vehicles coming from that country during 2018 was started.

Police contacts were established with EUROPOL and the LKA of Austria, as well as judicial contacts through EUROJUST where the analysis and exchange of information between both countries took place.

They found that the heads of the organisation had created a series of fictitious companies, through which they issued the necessary documentation to lease vehicles from different concessions.

They used the identities of people paid to give their details for finance loans.

Once they had the vehicles, they were taken by road to Madrid to be registered as ‘imported’ cars.

With the ITV card in their possession, they completed the registration procedures at different Traffic Headquarters. In many cases they used identity documents certified by the National Police, as well as false invoices, purchase contracts and registration forms from Madrid City Council, in order to make it difficult to identify and locate the different participants in the scheme later on.

In the course of the operation, the agents also carried out two searches of vehicle sales outlets open to the public for their involvement in the facts under investigation.

The operation was carried out by agents belonging to the Grupo de Investigación de la Agrupación de Tráfico (G.I.A.T. Central), with the collaboration of the G.I.A.T. of Navarra, Murcia, Zaragoza, Valencia, Seville, Alicante, Jaén, Granada, Córdoba, Málaga, Almería, Ciudad Real, Pontevedra, La Rioja, Segovia, Guadalajara and Zamora; as well as the Organic Judicial Police Units of Vizcaya, Barcelona and Girona, together with the Criminalistic Service of the Guardia Civil. In addition, they have had the collaboration of the Interior Attaché Office of the Romanian Embassy in Madrid, the LKA (Austrian police) and EUROPOL through the Technical Judicial Police Unit.

The operation is still open and several arrest and extradition orders issued by the Austrian Public Prosecutor’s Office are still to be served.