Experience does not save robbers from arrest 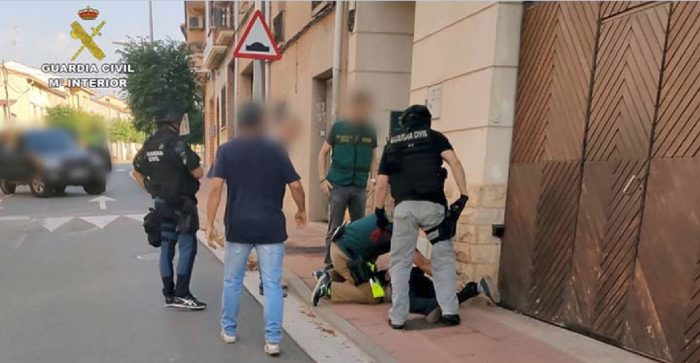 TAKEN DOWN: Police moved in on the duo. Credit: Guardia Civil

TWO suspects aged in their 60s have been arrested as they were allegedly about to rob their fourth bank this year.

One of them had allegedly been committing the robberies whilst on ‘day release’ from a prison whilst serving a sentence for similar crimes.

Police also recovered the duo’s ‘trademark’ weapon – a flashy silver pistol – when they moved in on the 60 and 64-years-old criminals in the small town of El Villar de Arnedo (La Rioja).

Named by police only as Patricio MA and Manuel FA, the two suspects have at least 10 previous convictions for similar offences, say police. In Manolo’s case, his first arrests date back to the 1980s, when he was in his 20s and the spoils of the assaults were still in pesetas.

One of the clues that led to the arrests was the eye-catching gun they always used to intimidate the victims, small in size and a striking silver colour.

Patricio was serving a sentence for similar offences in a regime of semi-freedom, and took advantage of his time away from the Social Insertion Centre (CIS) in Zaballa (Alava) to allegedly prepare and commit the bank robberies.

In the last six months they had allegedly stolen €90,000. Investigators believe Patricio and Manolo are responsible for robberies committed in February in Sartaguda (Navarra), in March in Corrales del Vino (Zamora) and in May in Mota del Marques (Valladolid).

The modus operandi was very similar and, in addition, the identifiable firearm was always used. Added to this was the fact that one of the robbers, who was later identified as Manolo, was very fat, which helped police link the cases.

Security cameras showed that in the three robberies committed, Patricio always entered first wearing a wig and glasses. Once inside, he would pull out the gun and threaten clients and employees, making it easier for his buddy, already wearing a ski masks and gloves, to grab cash.

At first, the two robbers would try to take the contents from the bank’s main safe and, if it was locked, they would settle for what was in the safe for the day’s movements.

Before making their escape they would force their victims to hand over their identity cards, threatening to track them down and retaliate if the police were called within an hour.

Police identified their suspects from evidence gathered and placed the pair under surveillance, watching as they drove from one small town to another to select their next target.

Officers moved in to make the arrests when they saw the duo approaching a bank having donned the wig and glasses and balaclava and gloves.