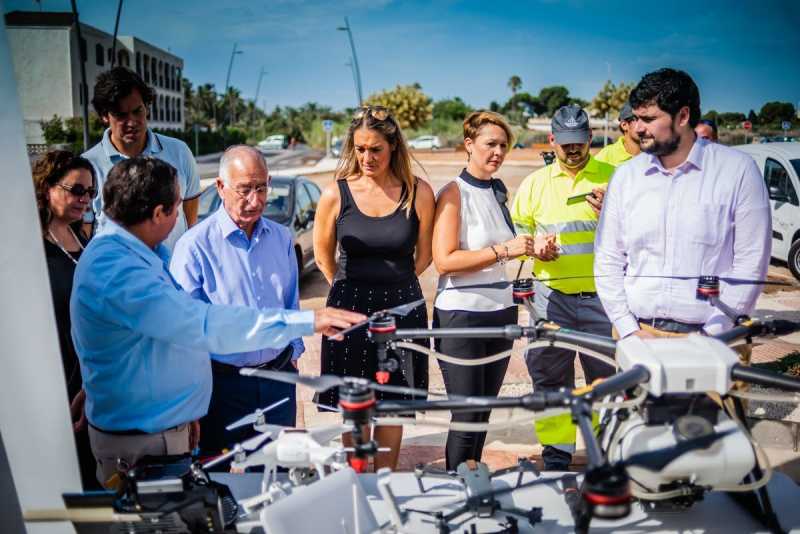 Drones equipped with thermal cameras identify mozzie hotspots, which are then fumigated.

Roquetas Mayor Gabriel Amat dropped by Torrequebrada in Aguadulce this week to meet with the technicians responsible for the municipality’s mosquito prevention, control and treatment campaign this year and to see for himself the equipment they have at their disposal.

Thanking the council employees and the technicians from the company reinforcing current anti-mozzie efforts, the Mayor commented that while the insects have not been a significant problem in Roquetas this summer “we have to take into account that we cannot lower our guard and we all have to continue collaborating, looking at the way to get to the places and gardens where there are focal points.”

A 10-strong team tackles Roquetas’ mosquito prevention in both urban and natural areas, including Punta Entinas and the Ribera de la Algaida.

Amat identified the latter as where mosquitos most appear following rain as the water there does not drain away, saying every effort was made to control their proliferation in the zone.

Parks and Gardens councillor Susi Ibañez talked about the importance of making residents aware they need to do their bit on their own properties to prevent the insects from appearing.

For this reason, she said, 4,000 mosquito prevention campaign leaflets in English and Spanish are being put in multiple uses centres, tourist offices and the Town Hall. The information will also be published on the council website, including a phone number to report suspected mosquito concentrations.