Epic bike ride for excellent cause 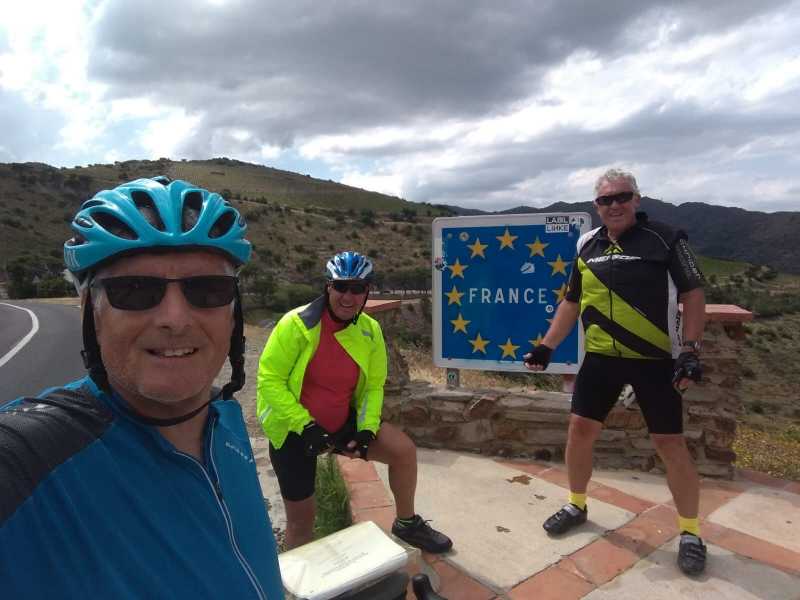 STAMINA: Team ‘3 Amigos, The fellowship of the chainring’ reach a major milestone at the French border CREDIT: Martin Morris

AN epic bike ride from Palomares to Portsmouth has raised more than €1,000 for an excellent cause.

Friends Martin Morris, Glenn Roulland and Rob Gillard chose the Alzheimer’s Society to benefit from the money they collected from taking on the challenge of the 2,100-kilometre self-supported cycle.

All three have family members who have been affected by the condition.

One of the trio’s biggest fundraising supporters was regular haunt, the Oasis bar in Palomares, which last Friday hosted a presentation of the €300 they raised: bar owner Emma Rundle donated monies from the Sunday quiz and Tuesday darts, and individual customers generously did their bit too.

Martin told the Euro Weekly News the three mates had already tested their cycling stamina, last year biking unsupported from Santander to Palomares, where both he and Glenn have owned property for some 14 years.

Back in May, Team ‘3 Amigos, The fellowship of the chainring’, as they dubbed themselves, went the extra mile so to speak, pedalling the other way and finishing in the Hampshire port city which is home to Rob and Glenn.

“This was by far the biggest ride we had ever undertaken”, Martin explained.

“We were fully self-supported with our panniers carrying our luggage. We were relying on our steel bikes and strong legs to get us by!”

They made Cartagena their first stop after two big climbs out of Aguilas and Puerto Mazzarron, then followed the coast, calling in at Alicante, Valencia, Barcelona and a host of many smaller stunning resorts. Then it was across the bottom of the Pyrenees and on to Carcassonne, Toulouse, La Rochelle and St Malo, where the team caught the ferry to Portsmouth and cycled the final nine mile-stretch.

The trio successfully completed the distance in the 21-day allotted time period, climbing as high as 32,400 feet and burning more 48,000 a piece along the route.

Martin told EWN, “Our last day, our only day of rain, there was a feeling of great personal achievement as I had always said one day I would cycle back to the UK rather than fly or drive – it definitely lowers your carbon footprint! – but also a tinge of sadness as a great adventure had come to an end.”