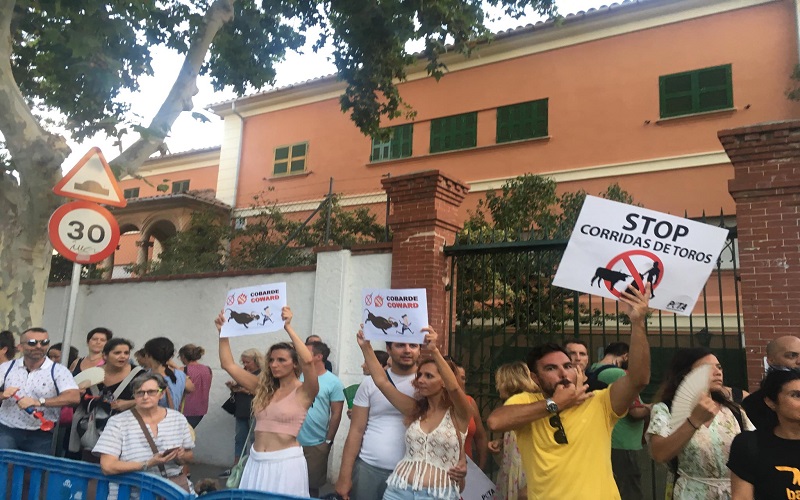 HUNDREDS of people gathered outside the Coliseo Balear to protest against the recently approved bullfight on Friday in Palma.

False reports have stated that only 300 people showed up to protest against the controversial event, but witnesses and protesters have taken to social media to highlight that there were many more and that the figure of 300 was representative of only one group of protesters.

A large number of the 8,000 people that decided to attend the bullfight donned Spanish flags, played the far-right song “cara al sol” to the protesters and mimicked bulls whilst others held their hands up in the ‘Nazi salute’.

John-Paul Jeffs, a resident of Palma told the Euro Weekly News “it was emotional to arrive and see all of the people protesting against the bullfight. We were met with hostility and blaring music by the organisers and supporters of the bullfight and I was shocked to learn that people were leaving as the bulls were killed and then going back in to enjoy the show”.

He also told EWN that “being present made a difference. I saw an elderly couple change their mind about buying a ticket for the show when they saw us and they were cheered by all of us as they walked away from the event.”

Many Facebook groups have started to post pictures of the event itself, the bull after it had been killed, and the protesters with heated arguments erupting between the two opposing sides. There are also calls to boycott Coca-Cola as their banners were draped over the side of the venue which people believe meant that they were official sponsors.

The protesters hope that they made enough of a difference to end the bullfights and that the “torture is not culture” slogan reaches enough people to change their mind about attending any future bullfights.