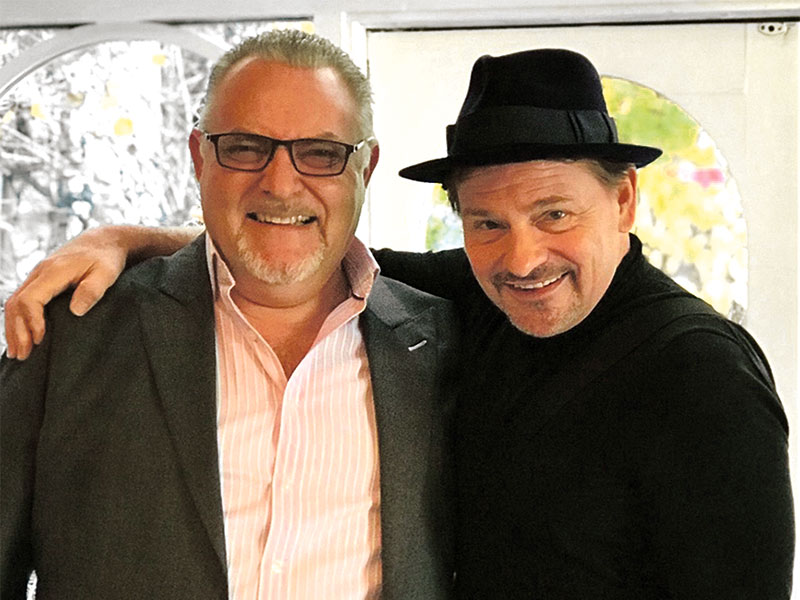 A REGULAR: Steven with Kevin Hull.

This week Celebrity Chef from Ready Steady Cook & Fellow Master Chef Steven Saunders, proprietor of The Little Geranium in La Cala cooks up a black pudding dish for his regulars!

BLACK PUDDING is a type of blood pudding originating in the UK and Ireland. It is made from pork blood with pork fat and a cereal, usually oatmeal, sometimes rice.

The different proportion of cereal and spices along with the use of certain herbs usually distinguishes where the black pudding is from.

Black puddings are supposed to be one of the oldest forms of sausage as the blood does not keep unless prepared in some way, and making a pudding is one of the easiest ways of ensuring it does not go to waste.

While the majority of modern black pudding recipes involve pork blood, this has not always been the case; sheep or cow blood was also used, and one 15th century English recipe used that of a porpoise, in a pudding eaten exclusively by the nobility!

Until at least the 19th century, cow or sheep blood was the usual basis for black puddings in Scotland.

Culinary uses for black pudding are vast and include black pudding ice cream, roast game dishes, especially venison with black pudding and a more conventional modern recipe is using it as an accompaniment to scallops which is delicious.

In Scotland and the north of England many fish and chip shops sell deep-fried, battered black pudding and many people love it fried with their full English breakfast!

White pudding is broadly similar to black pudding, but does not include blood. Modern recipes consist of suet or fat, oats or barley, breadcrumbs and usually pork and pork liver, filled into a natural sausage casing.


At The Little Geranium we have many regular clients returning for our black pudding. Kevin Hull has been a regular for years and close friend, so we have the dish named after him in the kitchen.

We call it Kev’s pudding as it is larger than the usual size tapas portion and is drenched in truffle sauce!

The black pudding is griddled and then topped with garlic spinach and fried quails eggs and then coated with a truffle cream made with white truffles, drizzled with a little truffle oil.

Another dish we do for another regular client is similar but instead of topping it with quails eggs we top it with seared foie gras glazed with a little Miraflores honey from our region and we call that Eamon’s black pudding.

The chefs all know what the dishes are and while other clients may eat them, we still put their names on the tickets.

Kev’s black pudding is different to Eamon’s and we need to differentiate them! Lorraine Kelly was in for lunch the other week and commented on how lovely the black pudding dish was, we had changed it a little so we now also have Lorraine’s black pudding! I used to make my own black pudding, but it is time consuming and I think some parts of the world do it better than me! So I buy it from either Asturiana in northern Spain or from Kilkenny in Ireland depending on the dish. Both are truly superb!

Recently one of the most popular black pudding dishes has been our terrine of black pudding with confit chicken wings wrapped in Serrano ham and served with home-made walnut bread.

It is delicious and sits proudly as a dish on our current eight-course tasting menu. It’s a white terrine speckled with the black pudding as black and white looks striking!

Making a terrine isn’t as difficult as it looks and so if you follow this simple procedure you could serve up this stunning terrine as a lunchtime snack, a dinner party starter or even on a buffet table especially good for a large party or Christmas buffet!

Follow these simple rules and this terrine will come out perfectly!

So first we must line a terrine mould with cling film allowing it to overhang as we are going to need to wrap up the terrine.

Then line the mould with thin slices of Serrano or Parma ham on the top of the cling film, ensure that the ham is also overlapping and covering the sides and the base. Now prepare the terrine mixture.

For the chicken confit

Ingredients for one terrine which serves 12

A confit is something that it slow cooked (slow braised) usually in duck or goose fat which acts as the carrier for flavours especially when you add garlic, cinnamon, peppercorns, orange zest and so on.

The word confit is French and derives from the word confiture or preserve. Nowadays I don’t use so much fat so I make a light fresh chicken stock and then pack it with the garlic and cinnamon etc.

Pour it over the chicken legs in a large roasting tin (we use the wings, but this is more time consuming as they are tiny but the meat is sweeter). Cover the roasting tin with tin foil and cook in a pre-heated oven at 150ºC for at least three hours.

Check it from time to time. It is ready when the meat literally falls off the bone with ease.