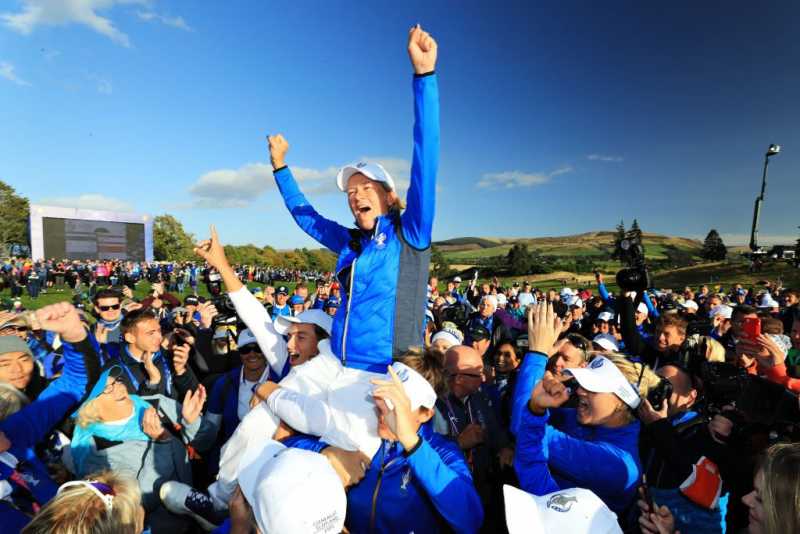 AN incredible finish saw Europe snatch victory from the jaws of defeat as they won the Solheim Cup for the first time since 2013.

Suzann Pettersen holed the decisive putt on the 18th green to send thousands of fans at Gleneagles  into raptures.

Team USA were left devastated after they failed to secure the half point they needed to retain the trophy from any of the last three matches.

Anna Nordqvist beat Morgan Pressel  4&3 and Bronte Law overcame Ally McDonald 2&1 leaving the whole match resting on the result between Pettersen and Marina Alex. They were both on the 18th green and with makeable putts for birdie.

Captain Catriona Matthew had picked Petterson as a wildcard and the decision was justified when she rolled in an eight-footer to give Europe the point they needed after Alex had missed her effort.

In a truly exciting final day the tie had swung one way and another, until it looked like the USA had finally wrestled away the advantage.

The middle order matches all went America’s way and put them on the brink of a triumph which would have been Juli Inkster’s third in a row as Captain. Angel Yin beat Azahara Munoz in the fifth match, then Meghan Khang won the 18th hole to claim a half from Charley Hull. But the final three matches belonged to Europe.

Pettersen, who was something of a controversial selection, said: “Can you ask for more?”

“The last putt to win the Cup, when it’s that close? History was just made, to win here in front of the Scottish crowd, to be here most of all. I could never in a million years dream of this.

“I mean, to hole the winning putt, to win the Cup. Nothing beats The Solheim Cup in my career.

“I honestly didn’t know when I stood over the putt that that was to win it. It was left centre and I couldn’t have hit it any better. I’m on the best team ever.”

USA Captain Inkster was graceful in defeat, saying: “The Europeans played great. You tip your hat.

“We had a few tears. And I said it’s okay. But the bottom line is we had a great week, the Europeans played great and we’re going to have a great party.

“The sun’s going to come up tomorrow. This will give them the fuel and fire for another two years to work at their game, to be on that team, to try to get that Cup back. I just said, ‘Hold your heads up because you should not be disappointed’.”