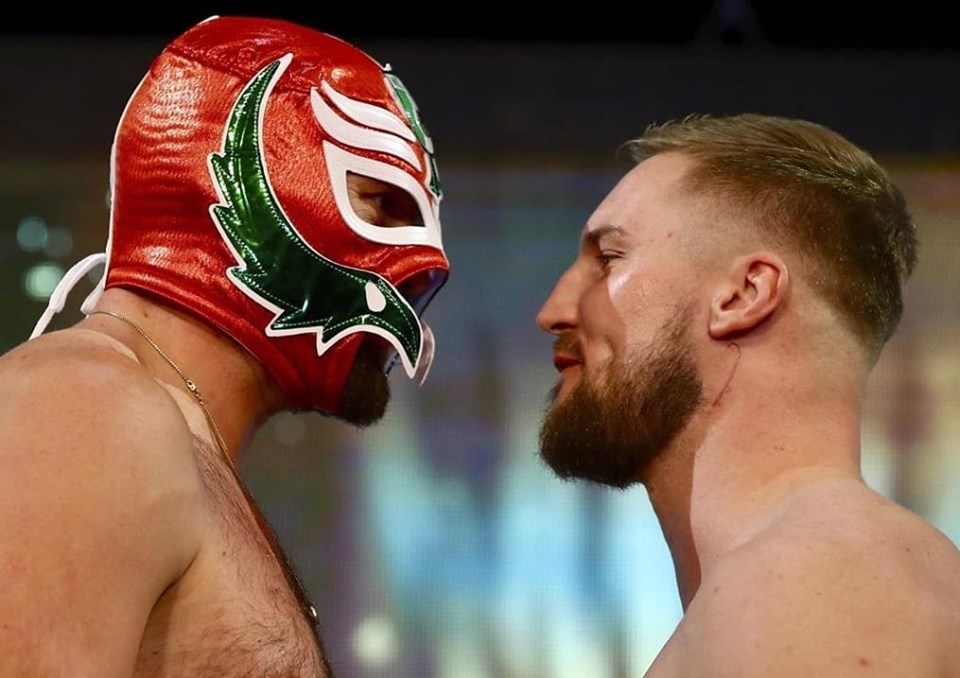 EUROPEAN fight fans had an early start as the ring walk started at 6am CET, boxers Tyson Fury and Otto Wallin arriving in totally different styles.

Wallin was hardly noticed entering the ring as he jogged in quickly in a sleeveless black robe.

Fury sporting a Mexican sombrero and poncho style robe in celebration of Mexican Independence Day, came to the ring in a chariot as a mariachi band played alongside dancers.

Round one saw Fury start off boxing from the outside off the back foot as Wallin moved forward, trying to negotiate his way inside that rangy 85in jab. Fury worked the jab to the head and body. Wallin burrowed inside but struggle, although got his man to the ropes on occasions. Quite an uneventful opening round, but Wallin took it on points as Fury studied his opponent.

Round two saw a crisp combination of body shots from Wallin early in the second round. Fury answered with a right hand and switched to a southpaw stance like he’s done in his recent fights. Wallin trapped Fury in a neutral corner and threw a bunch of shots to the body, some of which land cleanly. But Fury sprung off the ropes and buzzed Wallin with a hard right hand, finishing another right hand to Wallin’s temple at the end of the round. Fury started to find his range and tempo as he got the right hand going.

Round three saw drama. Fury started using feints to try and set traps and create openings. He landed a hard right then landing a couple of hard shots upstairs. Wallin landed a clean left hand on Fury’s right eye that opened up a cut. And it was a bad one with Fury not being cut since 2010.

While Fury claimed it was a clash of heads it was clearly a clean shot that opened up the wound. That meant if the fight was stopped due to the cut, Wallin would be declared the winner by TKO and this cut had clearly given Fury something to think about!

Round four started with Fury bleeding badly, the blood getting in his eye, and he saw Fury constantly wiping at it. Wallin started targeting the gash. Fury was upset, constantly chirping at his opponent. Wallin showed no fear. High drama as Fury didn’t seem right and the crowd started to feel a potential shock in the air.

Fury had landed 39 of 160 punches, compared to 42 of 110 for Wallin. Fury’s corner seemed concerned at the end of the round as they got to work again on the battered deeply cut eye.

Round five arrived with more drama as it looked liked there was another cut on Fury’s eye, one on the brow and now another on the eyelid. Wallin was fearless and was in pursuit of Fury, but Fury did just enough to win the exchanges. He landed a couple of good uppercuts and it was enough to take the round on the score card card.

Wallin was connecting with an average of 10 punches per round, nearly double what Fury’s last nine opponents managed to land. Fury knew he now had a battle on and would have to dig deep into reserves.

Round six was a good round for Wallin, and Fury looked out of sorts. Referee Tony Weeks stopped the action and asked the ringside physician to take a look at the cut. Fury insisted he could see and the fight continued. Fury then sprung off the ropes and unloaded with a barrage of punches upstairs.

Fury was now fighting with urgency, but the cut was getting worse and worse. Right at the end of the round Wallin appeared to thumb at the cut when being separated off the break. He raked his glove across the gash. It was a deliberate foul and Fury looked both angry and surprised. It was filthy underhand tactics.

Round seven saw Fury spring from the corner with half a jar of Vaseline on his right eye, clearly looking for a knockout in the seventh. A renewed sense of urgency stood out from the bigger man. He was throwing and landing more and physically imposing himself on his opponent. Wallin took Fury’s best shots, but midway through the round and he looked gassed out. The Swede’s eye was also beginning to swell. It was a big Fury round.

As we came to round eight Fury’s pressure started to change the tenor of the proceedings. He landed two crunching shots to the body followed with a dynamic great uppercut from Fury.  Fury continued to impose himself, leaning down on Wallin against the ropes. He was bleeding badly, but was landing more frequently and with the harder shots. This was another easy round for Fury, who poured on the punishment. Fury landed 23 of 63 shots, compared to nine of 28 for Wallin.

Entering round nine Wallin had all but abandoned the body attack that was working so well for him early on. Fury landed a big right, then backed Wallin up with a body shot. The cut over Fury’s right eye had opened up and was profusely gushing blood, but Wallin’s punches had nothing on them. It felt like a race against time. Fury landed a hard uppercut in the centre of the ring and backed his man up. Fury hurt Wallin badly with a left uppercut with seconds left in the round and the Swede seemed to have been saved by the bell.

Fury raced from the corner at the start of round 10 and opened up with a furious combination of a dozen punches upstairs. Wallin tried to hold on, but Fury kept leaning down on him. Fury was clearly going for the knockout.

Wallin looked like he was ready to drop. His face was swollen and a trickle of blood running from his nostrils. Fury landed a punishing left to the liver with again Wallin up against the ropes.  Wallin was trapped in the corner and was completely exhausted. Fury firing off everything now, Wallin fought back in spots, but this was one-way traffic starting to take place.

Round 11 started in the same style as the previous round, Fury picking away at his opponent from the bell to in total command of the fight now. At the end of the round Fury landed a massive left hand to the body that badly hurt Wallin. He was saved by the bell: any more seconds and the fight would clearly have been over.

Final round and Wallin lands a big left hand early on as he knew he needed a knockout and had nothing to lose. He clearly hurt Fury, Fury was hurt against the run of play and he was holding on at times in an attempt to take a rest. Wallin landed more punches to try and take his final shot and KO the champ.

Fury’s cut was bleeding badly again, streaming blood down the right side of his face. Fury was backing up, pawing at the wound. Wallin was letting his hands go and firing everything he had left in his locker looking for that knock-out blow, but he couldn’t manage it as Fury saw out the round despite the final flurry of attack from his brave opponent.

Although the fight was going to the scorecards it was an obvious decision that the ring side judges had to make. Fury was still the lineal heavyweight champion of the world.

With his newly announced two-fight package with Deontay Wilder early next year, opinion is Fury will have to step back up to another level to face the hardest hitting heavyweight of them all. Less of the showmanship and more graft required if he’s to achieve the previous performance against Wilder, albeit this is “the Gypsy King” and nothing anymore is a surprise!