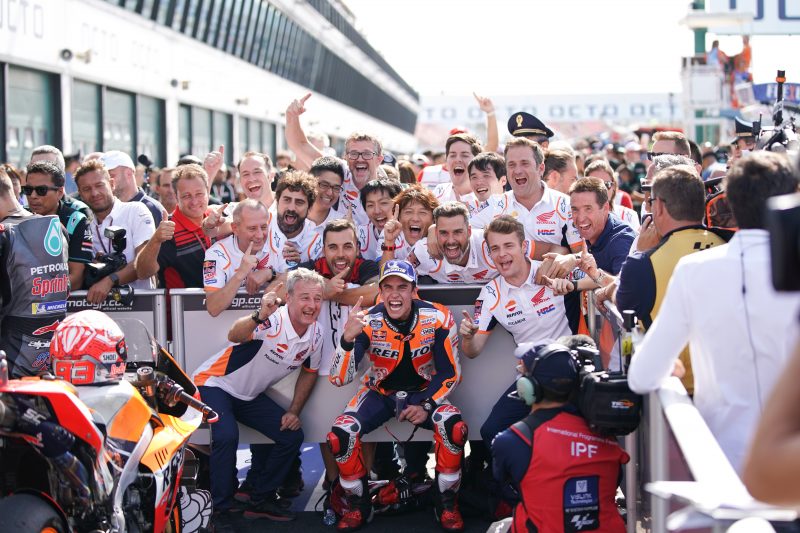 MARC MARQUEZ has become the fourth most successful rider in Grand Prix history.

He took his 77th career victory at the San Marino GP to go past Mike Hailwood’s tally of 76.

In a thrilling battle Fabio Quartararo (Petronas Yamaha), who led from the start, was overhauled on the last lap. Maverick Viñales (Monster Energy Yamaha) completed the podium with team mate and nine times champion Valentino Rossi in fourth.

Marquez made a flying start to the race and moved to fourth by the first corner, quickly progressing up to third just a few corners later. Muscling past Viñales on lap four, the World Championship leader set about closing down the almost one-second lead of Fabio Quartararo.

The Frenchman’s advantage was soon reduced to just two tenths, Marquez electing to wait for his moment to attack. As the laps ticked down, the reigning champion began to edge closer and put increasing pressure on the young French rider.

But it wasn’t until the last lap that he finally made his move.

Marquez had the run on Quartararo on the start/finish straight and led into turn one. Quartararo got a good run out of turn two and turn three though as the rookie came straight back. Into turn four they went, Quartararo was back at the summit but the back straight and turn eight provided a golden passing opportunity.

Marquez, late on the brakes, somehow managed to keep control and take the lead once more. Now it was Marquez’ to lose. There was no way through for Quartararo as Marquez started to ride defensively.

Honda leave Misano extending their advantage in the Manufacturer Championship to 60 points over closest rivals Ducati while the Repsol Honda Team close the deficit to the Ducati Team in the Team Championship to just 25 points. With Round 14, the Gran Premio Michelin de Aragon, taking place on September 22 the Repsol Honda Team are keen to carry their momentum forward as they return to Spanish soil.

Marquez said of the race: “Honestly speaking, I knew it wasn’t necessary to win because I saw that Rins was out and Dovizioso was far from us but I had some extra motivation. I just tried to stay with Fabio as close as I could and in the end I was weighing up whether to try or not. On the last lap I decided to go. I knew Fabio was very fast in Sector three, so I made my move before that and closed the corner as much as I could. Fabio rode a very strong race today. I raced as smart as I could and in the end it is nice to win in Italy, but even nicer to have 93 points of advantage.”