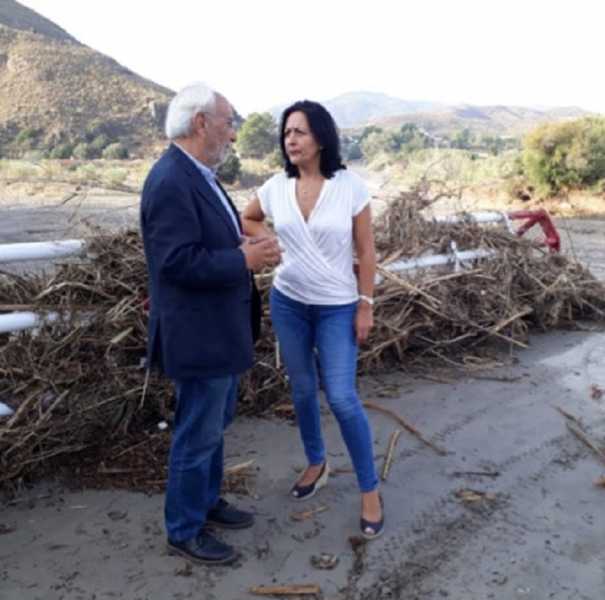 THE Government Sub-delegate in Almeria has visited the Almanzora Valley to see the aftermath of the severe weather first-hand.
Manuel de la Fuente was in Cantoria, Arboleas, Purchena, Armuñarmuand Seron on Tuesday, where accompanied by the local mayors he went to take a look at some of the areas worst hit by the torrential rains and flooding.
The sub-delegate began the day in Cantoria where at one point nearly 110 litres of rain per square metre fell in just two hours. The local council reported on Facebook that in the La Hojilla watercourse connecting Cantoria with La Hoya the water level reached nearly two metres, breaking up the road and the bridge’s concrete chains. Access to the El Faz area inhabited by 200 people was cut off.
The torrent of water also damaged the bridge going over the Almanzora river between Cantoria town and Almanzora. Here the water got up to more than four metres and up to two metres on the road.
The local council said it was still assessing the full extent of the weather damage
The most important damage in Arboleas was the breakages to pipes supplying water to the El Rincon, La Cinta and Tahullas areas, as well as numerous landslides onto municipal roads.
Armuña also experienced flooding on country roads, plus damage to some watercourses and to municipal water supply networks.
In Purchena the premises of an electrical installation company were completely flooded in the downpours, while in Seron it was public facilities which took the worst hit.
The so-called ‘cold snap’ dumped in the regions of 180 litres of rainwater per square metre on the municipality in around four hours. Water got into buildings including the sports pavillion and the municipal gymnasium.
Some 60 kilometres of Seron’s rural roads and much of the public water supply infrastructure suffered some kind of damage: sections of pipe were broken or blocked or in some places completely swept away.
Press reported the local council has estimated the total damage adds up to close to €3 million.