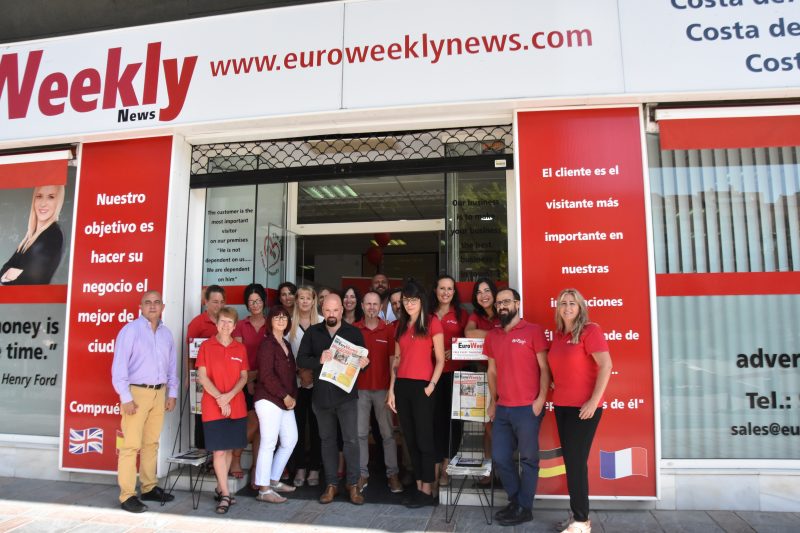 MULTI-AWARD winning vocalist Antony Wolfson, a firm favourite on the Costa del Sol circuit, is heading back to the UK after more than six years building a huge and loyal fan base on the coast.

But before he leaves to embark on a marketing career next month, heading up business for one of the largest digital transformation organisations in the UK, the much-loved entertainer stopped off at the Euro Weekly News head office for a farewell celebration.

“EWN, and in particular owners Michel and Steven Euesden, have supported me hugely since I arrived on the Costa del Sol,” he said: “EWN has been like my media partner here in Spain.”

With more than 50,000 followers worldwide and personally acclaimed by the friends and family of Elvis Presley, Antony is rated number one Rock ‘n’ Roll Artist worldwide by premier music brand ReverbNation.

In fact, he had the privilege of recording two songs which were written for Elvis but unrecorded by the legend himself.

“My great friend Tim Knight is an ex A&R guy for Universal Warner Records and has supported my music from the moment I met him. He provided me with the opportunity to record the two songs which went on to win awards in America. I even had the chance to perform at Hard Rock Café in Memphis three years ago and meet Priscilla Presley.”

During the television and radio coverage that followed the release of the tracks, Antony earned himself the nicknames ‘The Ghost of Elvis Presley’ and ‘Elvis Reincarnated’.

“Doing that was the highlight of my career, a real accolade and a privilege. But there are lots of highlights. I’ve done some great shows here and the audience reactions have been astonishing. To be able to touch people through music is amazing.

“Almost every show I do is a highlight for me. I have always tried to be authentic, I sing from my heart and soul and I think that’s what has touched people.

“I’m still going to keep going with the music. The music carries on, but instead of doing it full time, it will be something I do when I want to.

“I will be coming back, I’ve got some shows booked. I’m doing some Christmas shows and will be performing on Sun Born yacht in Gibraltar on New Year’s Eve. But from now on, the majority of my music work will be in London, I’ve already been approached by several venues.

“Moving back to the UK is going to be a big change, but I’m excited. I have a good fan base here and I will miss a lot of people, friends and fans.”

“I just really want to say a massive thank you to everyone who has supported me. I was overwhelmed by the outpouring of support I received when I had my equipment stolen four months ago, it was incredible. So many people were very kind to me.

“I would never have got where I am at this moment without it.”

Everybody at EWN would like to wish Antony all the very best in the future – he will be missed.