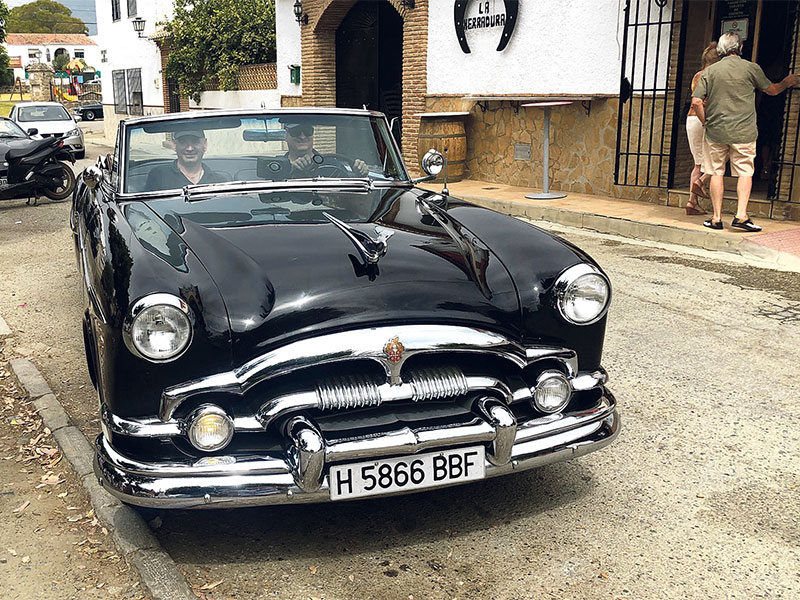 SUPERB: A variety of cars participated.

ELEVEN years young and still rocking on! The CCCA proved that it is most certainly THE classic car club in southern Spain and probably among the very best in all of mainland Spain! In fact, it’s probably one of the best Clubs around, even without the mantle of classic cars about it!

That was the opinion of many who came along and enjoyed the 11 year ‘Birthday’ celebrations earlier this month.  The Clubnight and party at Treetops in El Chaparral was a huge success with the lovely terrace there rammed with over 130 enthusiastic and happy people.

Entertainment was provided by Elena Paul and the dining experience was first class thanks to the staff of the Treetops Restaurante. Famous honorary members were in attendance including former McLaren team boss Jo Ramirez, ex-Jaguar Le Mans racing driver Win Percy and Formula 1 luminary, Pat Symonds.  All thoroughly enjoyed the occasion!

With just a few days to recover, next on the event celebration list was the Classic car run and lunch the following Saturday. Almost 100 people turned up at Venta Los Almendros, just up the Ronda road above San Pedro, to enjoy a breakfast and register for the run which was due to depart at 11.00am.

The registration process was rather hectic due to having well over 40 cars, but the ladies of the Club had it all under control and cars started to head out, one by one, in the direction of Ronda just a few minutes after 11.00 and after a briefing given by event organiser and Club Presidente, Ian Giles.

To say that the club has a cosmopolitan membership is something of an understatement as there were participants from the UK, Ireland, Australia, Sweden, Denmark, Hungary, Holland, Belgium, France, Germany, Finland, Switzerland and, of course, Spain! International? Most certainly!

The quality and the variety of cars was something special too, with some superb American cars including a new Corvette C7 ZR06 R and a Cadillac Eldorado from Arnie Hille and Danny Grietens. Kenny Rogers look-alike Kenny Schlosser brought out yet another beauty from his collection, this time a Ferrari Testa Rossa Convertible.  Another C5 Corvette was entered by Barry and Julie Surtees and a black Camaro came along driven by Martin Hall.

A couple of Bentley GTs gave a classy feel to the day along with a stunning Rolls Royce Spirit from Arthur Richardson and the most beautiful, yellow Rolls-Royce Cloud convertible was entered and driven by Tony and Trish Minta.

A brace of Jaguar F-Types, one driven by former works Jaguar driver, Win Percy, this one navigated by Jane Jackson, were most welcome and Spain’s Antonio Mendoza and his lovely English wife Barbara brought a fabulous Mercedes 190SL.

A number of Jaguars, Mercedes, MGs and a couple of Porsches made the list too and it was a delight to see the gorgeous, orange Porsche 911SC Sport of Gerry Denn who has been off the Club and classic car scene for some time due to illness. The Club was delighted to see him along with his wife, Kirsti, navigating.

One of the regular helpers of the Club, Angela Sharp, was very excited to be driving her ‘new’ Mini Cooper S JCW convertible, a car that made everyone smile! Angela was navigated by her sister, Lizzie Marriage.

Once cars were under way they had a simple drive up the long climb to Ronda where they then turned off in the direction of El Burgo. This part of the route was quite stunning, the scenery changing all the time as the cars sped along across the top of the Sierras de Ronda before dropping down into the little town of El Burgo.

From here the route took a small but beautiful road in the direction of Ardales, turning off before there to go up and over the mountain before dropping down in to Casarabonela. In the woods above this little town was the first stop for a celebratory glass of Cava.

Through the winding and sweeping roads over the mountain the convoy was headed by a fast-moving group comprising of Ian Giles in a modern AMG Mercedes, Win Percy in a Jaguar F-Type and John Lane in a very new BMW M850i. These three certainly seemed to be enjoying themselves and the glorious, traffic-free Andalucian roads!

Onwards from here to Zalea where the next pit-stop was for coffee or a beer and a tapa at Bar La Herradura. All cars were running well and no-one had had any navigational problems!

After coffee came an easy run back up the A-355, passing Coin and Alhaurin going in the direction of Mijas, but turning down towards Entrerrios and the taking the Mijas Golf road to join the main A-7.

Cars started to arrive at the Safari rooms of Club La Costa World around 3.00pm after a really enjoyable 140 Kms to be welcomed with a glass of Cava before enjoying a superb lunch provided by Club La Costa World.  A jazz band played the afternoon away prompting  some dancing as well as dining and a good excuse to continue the 11-year celebrations!

All agreed that the route had been superb as was the quality of the lunch and the service. The Club will be going back there soon!

There is more to come in October including a dinner, a one-day classic car run and then a seven- day Tour Al Andalus taking in Toledo, Lisbon and other places. The Entry List  for this event is absolutely full and there will be a report on the event in this page in due course.

Until the next time,
Ian Giles