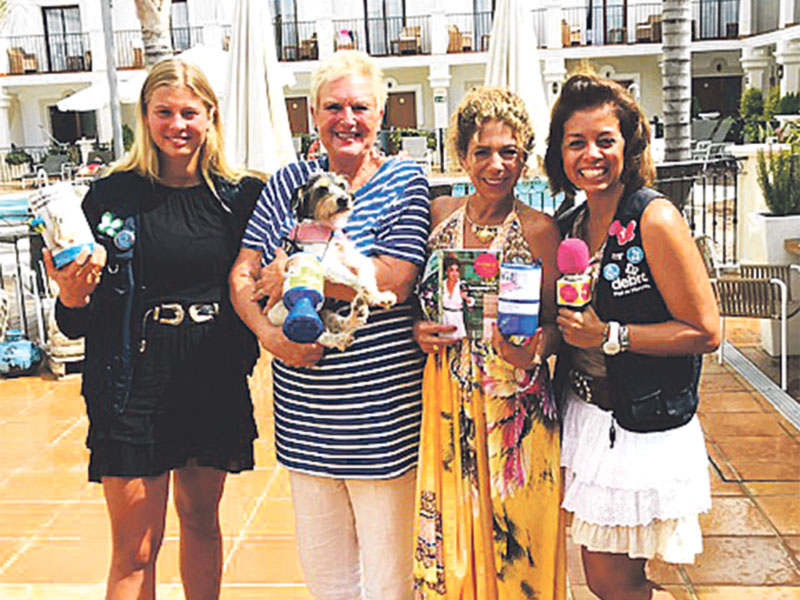 Marbella Now TV has contribution tins for Triple A, Age Concern and Butterfly Children charities at the recordings.

I actually had a lot of fun last week: I thoroughly enjoyed the Costa Press Club dinner at Ban Thai. I had a chance to catch up with Ali Meehan of Costa Women, learn more about the origins of Puerto Banus and find out that our very own Garry Waite has written a book!

Additionally I met new and very interesting people and thanks to Nicola Erlich and Karl Smallman I tried Dragonfruit for the first time and had a very delicious meal. All in all, well worth staying up that bit later ‘on a school night.’

I also went to the reopening of the La Campana restaurant, now owned by two beautiful half Russian, half Swedish girls who have grown up in Marbella, studied at Aloha and are championship ballet dancers!

I took some great footage for the show as well as at the Binck Bank event and the Age Concern luncheon where amongst other things I chatted with two ladies in their 90’s!! I also went to the Marbella Marina to visit Maya – a new #ZeroHero partner.

I have to say I was very pleasantly surprised at how well decorated and professional this bar, lounge, nightclub is; far more Puerto Banus style than I’d expected.

Talking about style it’s coming up to red-carpet season again so I met and interviewed Andy Loveday of Carnaby International, one of the sponsors for the Marbella International Film Festival (14th Edition October 2 to 7).

Andy also has a role in the world premiere movie ‘Marbella Heist’ to be launched on October 4 at Teatro Cines Goya. Terry Stone is a British actor also in the film and I have to say he looks equally as good as a thug as he does in a dress. You’ll have to watch the interview for more on the dress!!

Stuart and Sandie Ashing of Lux Therapy Clinic explain how they use hypnotherapy, each with their own particular style, to guide us in short cuts to a better way of life.

Cristina Sánchez Piña represents the Andres Olivares Foundation also hoping to improve the lives of children with cancer. They have a gala to raise much-needed funds on September 27.

On a lighter note Dr Hans-Jürgen Hartmann and Martina Spaan from the Rotary Club Marbella-Guadalmina tell us about the Rotary Car Run on September 28 where clues left at different locations will take us on a guided drive around our beautiful countryside.

Lily van Tongeren, one of Triple A Marbella’s most active and passionate volunteers also pops in to say hello and show us how well Pasja is doing and of course Charo of the Butterfly Children charity with intern Amber are back on the show this week; our charities need us. In fact if we were to get involved with even half the things going on we’d never have a dull moment.