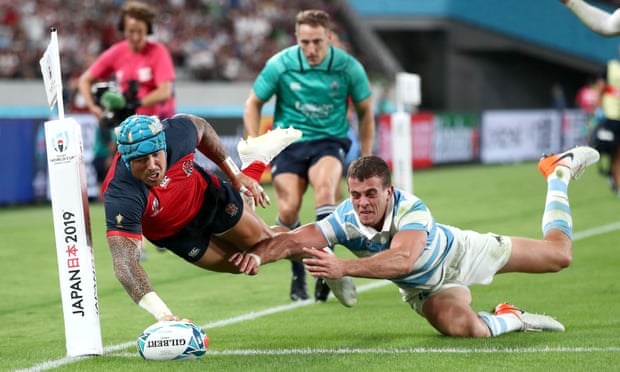 Nigel Owen blew his whistle and Benjamin Urdapilleta kicked off for Argentina. Ben Youngs took the ball from the back of the ensuing ruck and kicked up the field. Argentina took possession and went through the phases as they made their way up the centre of the pitch.

With England under extreme pressure, Elliot Daly put in a brilliant tackle to prevent Santiago Carreras from going over in the corner. Referee Nigel Owens took Owen Farrell to one side and pointed out three different penalties his team could have conceded in the build-up to the tackle. Argentina got one of those penalties for a no-arms tackle by Kyle Sinckler. Owens told Farrell to warn his players that there was a yellow card in the post. Benjamin Urdapilleta took the penalty England went behind, 0-3.

England hit back immediately. A drive for the Argentina line after a good take from Mario Itoje was stopped illegally. With a penalty to fall back on, England had a freebie and played the ball out to the wing. Jonny May went over in the corner after George Ford had drawn two tacklers before finding his teammate out by the touchline. Owen Farrell pulled his conversion wide of the left upright so the score went to 5-3 with England taking the lead.

On 17 minutes saw a huge hit by second-row Tomas Lavanini on Owen Farrell that should have knocked the England centre into the middle week. It was very high! Nigel Owens went to his TMO.
Argentina went down to 14 men as Tomas Lavanini became the fifth player to be shown a red card in this tournament. Nigel Owens and his TMO saw no mitigating factors to keep him on the field. He was high, he led with his shoulder and caught Farrell on the head. He walked for the touchline and looked absolutely distraught. It was the correct decision.
On the 34th minute saw good play from England, who was just a couple of metres from the Argentina line.
Nigel Owens warned the Argentina players not to handle the ball. England sent the ball out wide – George Ford swung it towards Elliot Daly, who juggled it before gaining control and cutting inside two Argentinians to go over. Owen Farrell missed yet another kick, hitting the post with his conversion attempt. 10-3

The humidity in the Tokyo air meant the ball was like a bar of soap and cost England points.

The half-time gong sounded and the clock went red. England continued going through the phases in a bid to put a little more hurt on Argentina before the break. England laid siege to the Argentina line, having gone through 20 phases of play.

After a surge towards the line from Man Tuilagi, Billy Vunipola took the ball from the bottom of the ruck and passed to Ben Youngs. He spotted a gap and nipped through to touch down, as Pablo Matero missed the tackle for Argentina. Owen Farrell made it zero from four on the kicking front, missing his conversion attempt once again.

England went in at half time 15-3 up.
Play resumed, Billy Vunipola, who suffered an ankle injury towards the end of the first half,  replaced by Lewis Ludlam. Argentina, who were down to 14 men following the dismissal of Tomas Lavanini, made no changes.

Having dragged the Argentina defence from one side of the pitch to the other on 44 minutes. Jonny May went for the corner and was tackled. Underhill and Tuilagi drew the tacklers with a couple of good carries before Jonny May went over in the corner. Owen Farrell finally got his kicks aligned and put one over to make it 22-3 to England.

England were in complete control. George Ford pinned them back on their own line with a fine kick to the corner. Argentina won the lineout and cleared their lines.

Santiago Carrera gave away a penalty for going off his feet, but Nigel Owens played advantage. He called a second advantage when Santiago Medrano strayed offside. England took a penalty on the Argentina 22. and Owen Farrell slotted it over having found his shooting boots. Score increased to 25-3.

Courtney Lawes came off the bench for England with George Kruis making way. There was a break in play as Nigel Owens gave Joe Marler and Santiago Medrano a telling-off. “We haven’t had any problems in the scrum … until now,” he said. He told Marler not to start misbehaving, before instructing Medrano to “buy into the discipline and values your team-mates brought to the front row before going off”. He told them straight in his dulcet Welsh tones.

After some neat passing by assorted Argentinians, Matias Moroni exploited a gap in the England defence, stepped out of a last-ditch tackle by Manu Tuilagi and went over under the posts for Argentina. The try was converted. Argentina had not given up by moving the score to 25-10.

It was a nice try by Argentina but was an appalling lapse in concentration by England’s players that would be likely to displease their head coach Eddie Jones no end. They should have been  30 or more points clear at this stage.

Excellent play though from Jack Nowell after Jonny May broke the Argentina line with a dash through the centre. The ball was played wideout to Nowell by Farrell and the substitute cannoned into three opposition players, bounced away from them and broke through another tackle to touch down in the corner. Farrell’s conversion kick went over, taking a bounce off the left upright on its way. England lead increased to 32-10.

On 78 minutes England drove over from about 10 metres out for their sixth try of the game. The man at the bottom of the pile of bodies receiving congratulatory pats on the head was Luke Cowan-Dickie.  Both sets of players got involved in some “afters”, while Nigel Owens clucked disapprovingly at them like a farmyard hen.
Owen Farrell took the last kick of the game, slotting the ball between the posts for the conversion and sealing a comfortable win for England in the process 39-10.
It was a curate’s egg of a performance from the English players, good in spots, but with plenty of room for improvement after a disjointed, scrappy performance.