The Big Cats day out 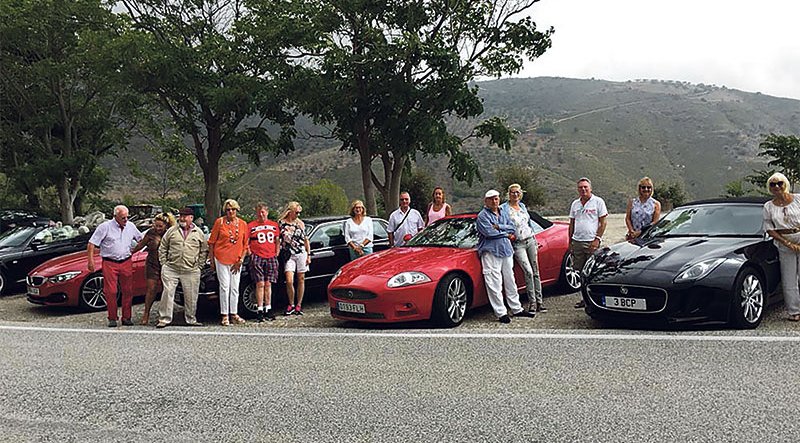 LAST weekend was the turn of the Jaguar Enthusiasts Club, Costa del Sol chapter, to get busy and put on a most enjoyable car run and lunch.

This time they started from the Restaurante El Trapiche for a trip northwards. In addition to the Big Cats there were a few welcome interlopers with a Mercedes, a BMW plus a hire car making up the party.   This is what their Chairman, Philip Wray, had to say about the day:-

“Although the weather was overcast, and the forecast was for rain, we departed from Trapiche past Lake Viñuela and on to Periana and towards Guaro. What is so enjoyable about this piece of road is the uphill climb in the foothills of the Sierra de Tejeda with the profusion of hairpin bends and not a single car coming the other way.

Not that there is no life here as we encountered a couple of substantial herds of goats wandering along the road under the watchful eye of their goatherd. The stupendous views were hidden by the low cloud so we had to imagine the panorama stretching on into the distance. Passing the summit the road straightened with a gentle descent towards Alfarnate. Although I thought my directions were clear it was fascinating to observe from the back that cars instead of going straight on as expected decided to scatter left and right. Not a disaster as most noticed their variations and after a quick U-turn rejoined the route. Alfarnate is a pretty little village with narrow streets which follow the riverbed.

Onwards to the Venta de Alfarnate on the junction of the old Malaga to Granada road. The venta is said to date from the 13th century. In 1850 a gang of 12 armed men carried out a robbery on the Malaga stage coach and there have been many famous visitors as well as assorted bandits. One of the better known was Luiz Monoz Garcia, the cross-eyed bandit from El Borge who used to frequently visit his mistress who had a husband in Alfarnate.

Unfortunately the venta was closed. The only sign of life was a very affectionate grey cat who was a bit like a rash, difficult to get rid of. Instead of coffee we had our traditional cava stop with crisps and orange juice. Suitably refreshed we continued towards Zafarraya and then back down the stunning route to Viñuela. En route we stopped for a coffee at the Restaurante Fuente la Pena. What a marvellous little restaurant, very friendly with great service and superb meat roasting which persuaded a couple to buy a tray full to take home. We will be back for a lunch here.

After coffee we continued to the excellent Restaurante el Pantano on the shore of Lake Viñuela. As usual we were warmly welcomed and were served a huge lunch with a selection of cheeses followed by a very tasty starter of chorizo and morcilla; then came a selection of either a prawn cocktail or a giant chicken salad. If you had any room after all that there was a choice of multiple lamb steaks, grilled salmon or massive chicken kebab followed by desserts. All this washed down with soft drinks or wine. As Ian said during the meal, “This is the best meal I have had for 30 euros for very many years.”

Everyone thoroughly enjoyed the day and departed after 5.00pm being careful past the speed camera on the downhill part of the A356. The next JEC run will be on October 19. Do join us.”

There is so much to do on the coast for classic and modern car enthusiasts these days, how lucky we are to have  so much to do and with the weather and roads to enjoy the cars and the countryside. And, of course, always a decent lunch to finish up these events!

Starting this weekend is Drive Andalucia’s first running of their Tour Al Andaluz.  Thirty cars and 60 people will set off through the Montes de Malaga on Day 1 of this fabulous seven-day Tour with a rest day in Lisbon mid-way through the event.  We’ll have a full report and pictures in the next issue.

Also this weekend, on Saturday, is the CCCA October run starting from El Caserio near Estepona and finishing at Venta El Garcia near Casares where a first class lunch will be expected!

That’s it for now, more next time!
Ian Giles