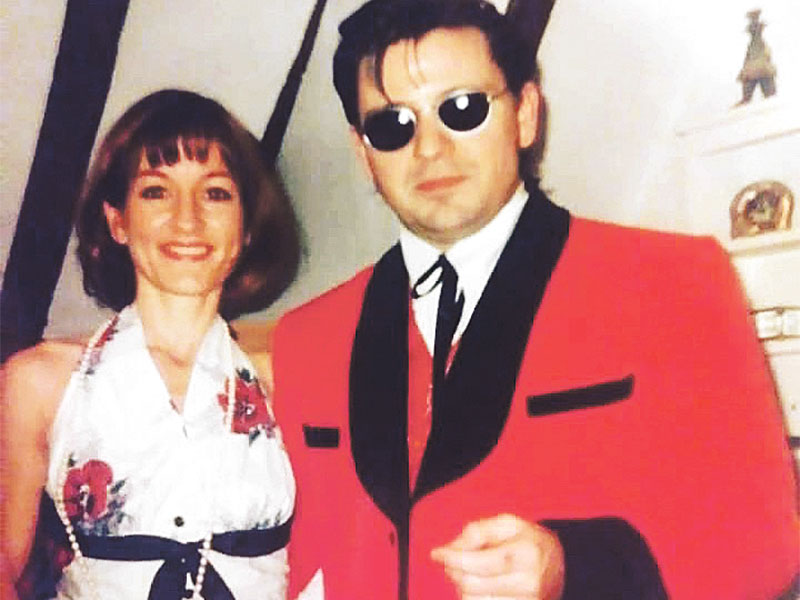 I WAS looking at some old photos over the weekend and came across one of me dressed as Elvis Presley.

It was at a party that I was invited to at Richard Branson’s home in Oxfordshire. It was the first time that I had been invited to one of his parties so you could say I was a Virgin!

I will never forget sitting in a long queue of cars that were dropping off guests to the side entrance of Richard’s house. The house had a marquee attached to it so guests didn’t actually see much of the house itself, but there were at least 300 people there.

I could see everyone getting out of the cars dressed in black tie. I panicked a little as I was dressed up as Elvis!

“Let me check the invite” I said and there at the bottom it clearly said Las Vegas Fancy Dress or Black Tie.

The party was to celebrate Virgin Airlines’ successful contract as partners in Las Vegas, meaning that you could now fly Virgin to Las Vegas, not only with British Airways.

It seemed obvious to me to dress up and Elvis stood for everything that Las Vegas was, so I thought it appropriate. When we got to the door there was Richard Branson welcoming everybody with his wife Joan.

He looked at me smiled and said “Hello Steven!” As if he was not surprised, because I was totally the only one in fancy dress!

Guests came over to me and asked what time I was on… assuming that I was the entertainment! I sat next to Laurence Llewelyn-Bowen, the eccentric designer who did Changing Rooms, makeovers and redesigning home interiors and on the other side was fashion model Jodie Kidd.

I enthused about what I really love doing, cooking! I had been pitching to Richard Branson to create the food on Virgin airways to Las Vegas offering clients something totally different that at the time had never been done before like perfectly cooked Lobster tails Thermidor followed by sousvide rare Charlois beef with foie gras.

I enthused to the Virgin Board that Virgin Airlines is a world class brand and deserves world class food. Richard agreed but said that he needed to do good food, but use cheaper ingredients.

“Good luck,” I replied and I left the meeting. So the bad news was that my lobster tails with reduced lobster syrup and sousvide fillet with wild mushrooms, smoked black garlic and foie gras foam were not on Virgin Airlines.

The good news is that they are on my current menu at The Little Geranium and so if you fancy trying these superb dishes, just go online to book.

Alternatively you could start off by making the lobster dish at home, here is the recipe!

NOTE: The little lobsters I buy are ideal to serve half a lobster as a starter. For a main course you will need to serve the whole one. When the lobster is smaller the flavour of the meat is far sweeter.

Method for the white sauce

Method for a basic lobster stock

For the lobster syrup

To cook the lobsters

If you are cooking your own lobster it is important to put the lobsters to sleep before cooking them by putting them in the freezer for about two hours.

Cook them one at a time to maintain the heat of the water. Put some lemon pieces and salt in the water and when boiling rapidly drop in the first lobster.

When the water comes back to the boil (usually one minute) then leave for two minutes and remove with a slotted spoon and immediately refresh (shock) in ice cold water.