The Battle Of Fuengirola 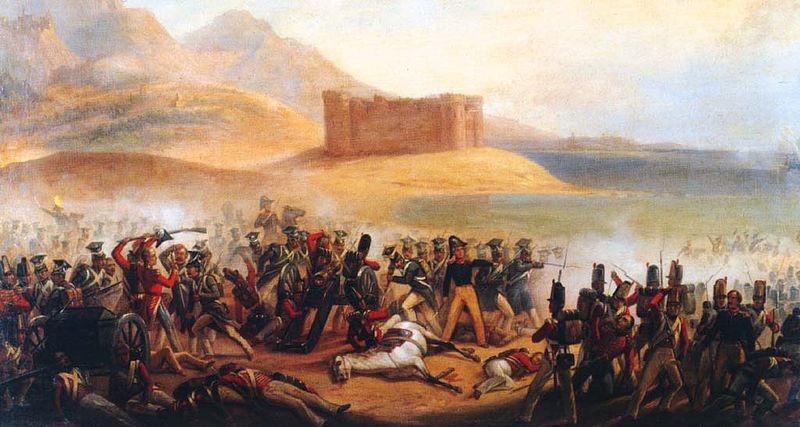 During the Peninsular War, a fierce battle took place at Fuengirola. This is a short account, more or less of what happened on the beach 209 years ago, in a then blood sodden spot where today most people are content to enjoy a barbecue and a beer.

The Peninsular War of the 19th century was a complicated series of battles and ongoing skirmishes between the expansive Napoleonic France and Portugal, at times Spain and the United Kingdom.
In the autumn of 1810, Major General Lord Andrew Blayney ofGibraltar had the bright idea of attacking the then French controlled port of Málaga. In order to do this, it seems he deemed it necessary to first capture the castle at Fuengirola. It also seems he assumed that a quick sail along the Andalucían coast to the reportedly poorly defended castle would result in a swift and easy victory. How wrong he was. The Fuengirola castle was defended by a small garrison of battle hardened conscripted Polish troops, some 100 men from the 4th Infantry, sent there for rest and recuperation by their French military masters.

Arriving around 2.00 pm on the 14th October 1810 with a much larger multi-national force of some 1,800 odd troops, Lord Blayney simply demanded that the Poles surrender the castle. The Captain in charge, Franciszek Mlokosiewicz reputedly replied something along the lines of “well if you want it-come and get it” so Blayney marched up to the castle gates waving his-later to be famous-sword in the air, hoping to receive the castle. The 14th October was never really a good day for the English, it was also the date of the Battle of Hastings in 1066. Big surprise, the fierce Polish soldiers opened fire on the larger advancing force, sank one of the British gunboats and caused considerable damage, with loss of life to the others. Nonplussed, the British force turned tail and ran for cover, only to return later that night with some heavy cannons to attack the castle properly the next day, the 15th October.

The still over-confident Lord Blayney unfortunately left his cannons poorly defended on the beach nearby so-quick as a flash-the Poles seized the moment, hopped over the castle walls, captured the cannons, turned them around and shelled the British forces with their own ammunition. The enraged Brits counter attacked and in force, so the cheeky Poles blew up Blayney’s remaining gunpowder and quickly “legged it” back inside the castle, slamming the door behind them with a bang.
Meanwhile in all the confusion, another 60 man Polish garrison based nearby at Mijas Pueblo had slipped through the chaotic British lines and joined their companions in the castle. Blayney re-grouped, organised some more gun powder, shelled the castle and attacked again. Only to be out flanked by another larger 400 man Polish garrison summoned from Alhaurin El Grande, accompanied by a further thirty French Dragoons (light cavalry) and by then, Captain Mlokosiewicz’s newly inspired forces from inside the castle. They took Andrew Blayney prisoner,sent his troops packing – again under fire from their own cannon – relieved Blayney of his sword and sent it off to Kraków in Poland. Where it still hangs in the Kraków museum today, a memento to one of the worst but little known defeats of British forces during the Peninsular War.