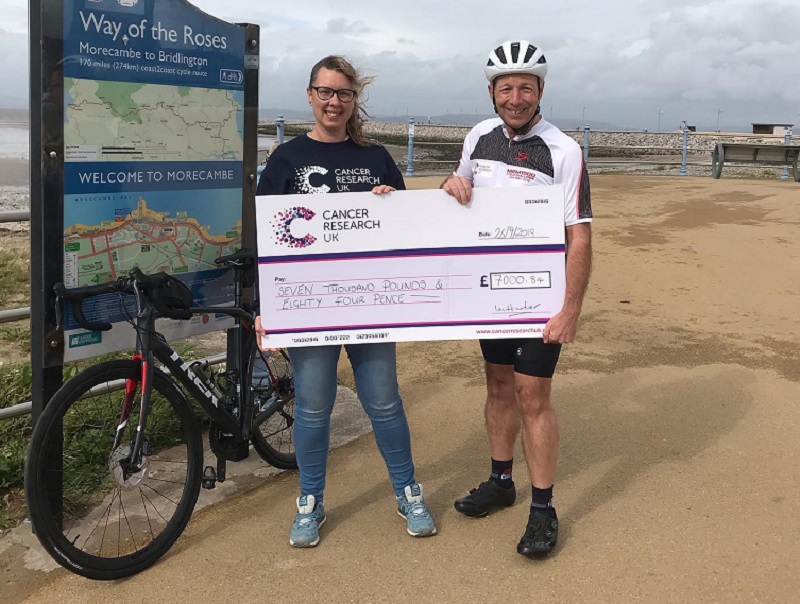 A MARATHON Morecambe to Mojacar bike ride has raised just over £7,000 for Cancer Research UK.
Lancastrian Ian Hunter succeeded in the challenge he set himself of covering the 1,500 mile distance in three weeks earlier this year, and now he has surpassed his initial goal of raising £5,000 for the cancer charity.
The Euro Weekly News was among those waiting to cheer Ian over the final finishing line when he made it to Mojacar after covering an average of 75 to 80 miles a day.
“I was really pleased with the way my body stood up to it, but it got mentally tough at times and it was fighting that”, the 65-year old revealed later.
What really kept him going the over the three weeks Ian said was thinking about why he was he had embarked on such an epic bike ride in the first place.
“I just had to switch onto the Cancer Research UK wristband the Lancashire fundraising manager Vikki Bassek gave me when I set off and focus on that.”
Looking back Ian said the mammoth bike ride had been a highly rewarding experience. Commenting on the grand total he collected, he stressed “I am extremely grateful and overwhelmed by the support from everyone which enabled me to exceed my donation target.”
Cancer Research UK’s local fundraising manager for Lancaster, Vikki Bassek, said the charity was “thrilled for Ian.
“Not only did he raise a fantastic amount of money for life saving research, he also completed an epic personal challenge and we can’t wait to see what he has planned next.”
Vikki added: “Cancer Research UK has made enormous progress in the fight against cancer. However, we have only been able to do this thanks to the dedication and commitment of volunteers and supporters like Ian, without whom we would not be able to fund our life-saving work.
“Ian trained so hard for this challenge, and it was great to see his progress on social media as the miles racked up. Seeing the video of him arriving on the final day and being surprised by his lovely wife was enough to bring a tear to my eye! We can’t thank Ian enough for putting himself through this for us.”
Ian, who has owned a holiday apartment in Mojacar since 2005, decided to raise funds for Cancer Research UK after losing his mum Joyce to the disease last year. His late mum visited him on the Costa Almeria many times and was planning to make one last visit. Sadly that never happened.
Incredibly Ian only took up cycling in 2017 after a health scare. He quickly caught the cycling bug. Then when cancer claimed Joyce’s life last year he came up with the idea of the fundraising ride to Mojacar, where he and Pam have had a holiday home for 14 years, and where Joyce visited them many times.