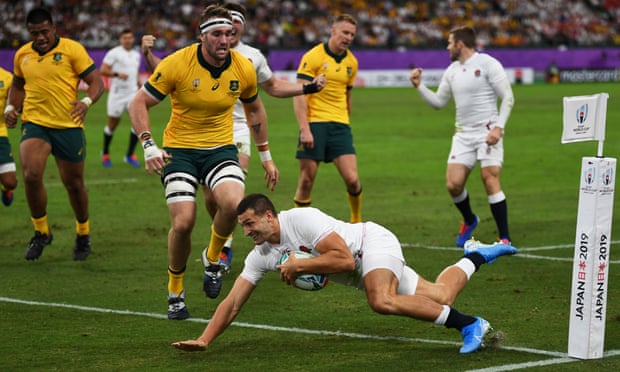 There was lots of singing from the stands for the England anthem, which suggested a more balanced fan presence than expected. Australia matched it and it was ready to go.

Reece Hodge got the game underway and Daly gave Vunipola his first carry before the ball was booted back to Australia.

Slade’s first contribution was to have the ball bumped off him in the tackle, Beale received it and went through the gap and ran 60 metres up to the England 22, but he got so far that there was no support with him. Not that it mattered as England had given a penalty away that Christian Lealiifano lined up, And the Wallaby ten slotted 0-3 Australia to take the lead of the game.

Quarter of an hour in, England got the ball out and ran a nice pattern outright to Watson who nearly got away but was scragged, it went all the way left and England were laying siege to the line before Pocock & Hooper got in and nicked it at the breakdown,  England got  the ball back and there was more fast soft hands right to Watson, it was recycled and went all the way left,  with some clever dummy runs in midfield  and past the Aussie  defensive line and May went in right in the left corner for the try,Farrell slotted a great kick from the touchline for England to take the lead 3-7.
Just 2 minutes later Genia threw an interception to Slade and he was away, but he didn’t have the pace to get there from 70 metres so he dinked a beautiful kick on the run for May to gather and he definitely had the pace to get in scoring another English try! Farrell kicked another one from out left successfully to further the lead 14-3.
Shortly after the Wallabies grabbed from the lineout and sent their midfield runners at the England line, Izack Rodda punched a bit of a hole through and when it was recycled Jamie George was pinged for offside and Christian Lealiifano has the simplest of kicks for the penalty 14-6.
Tuilagi got some momentum on a carry and Christian Lealiifano gave away a kickable penalty on 29 mins for not rolling away. Owen Farrell stroked it over to increase the lead to 17-6 to England.

Australia had a scrum in the England 22. on 39 minutes  It went down once and Sinckler believed Sio was dropping his bind and screamed “remain!” at touch judge Romain Poite 50 metres away on that side of the scrum to draw his attention. That level of cheeking of officials normally brings a penalty, but the ref let it go, However, the reset scrum brings the Aussies a penalty they should’ve had for that for the last England collapsing scrum and Christian Lealiifano lined it up and smacked the penalty to make it a half time score of 17-9.

Farrell got the second half underway but England soon saw their lead dwindle, Daly dropped a straightforward catch, and Australia went back on the attack. Slade pushed up too far in defence and the ball was floated over him and popped to Koroibete on the inside drift on halfway and he was through and took Daly to the cleaners by standing him up and going around him to score. It wasn’t a great few minutes for the England fullback. The Conversion was added and the game very much on as it went 17-16.

England refired up, Watson made some headway up the right and when the ball was recycled left Sinckler ran a fabulous out to in line in midfield and was through and in from 15 metres. He even deliberately ran at Beale to bump him, just to make some sort of point. Farrell converted for England to extend the lead to 24-16.

Shortly afterwards on 48 minutes, England held up  Sio in defence after the prop was given a pretty impossible task by a dodgy pass from Lealiifano and they won the scrum. They doubled down on this by splintering the Wallaby eight and winning a penalty. Farrell indicated the sticks and scored 27-16.

56 minutes and  Itoje did a great job of disrupting the Aussies throw and thwarted the catch and drive, but the Wallabies still had it and were working phases in the England 22 with Toomua orchestrating. Australia got another penalty to as Underhill went off his feet in the 22 and they took the scrum in the shadow of the posts but after a few changes to the line England stole the ball back with tremendous defending, it was a massive moment in the game.

TMO time on 68 minutes, England caught and drove from the lineout, Youngs pulled the ball out of the maul sprinted for the blindside corner and grounded it, but it had a look of being spilt. The TMO confirmed this, but England had a penalty for Australia’s side entry to the maul.

Farrell pointed at the sticks with a crushing inevitability and smashed it over to make it 30-16.

More points for England when they caught and drove and began a slow, draining, demoralising maul march forward which Australia were pinged for collapsing. Owen took the screw and decided to turn it by pointing at the posts and hit home the penalty furthering the lead 33-16.

Final five minutes Ford sent a raking, soul-splintering kick into touch near the Australia line. The Wallabies had to go from there, but they were given some help with a penalty that Beale tapped and floated a pass towards Hooper but Watson intercepted for England and raced to the line. Farrell converted to make it 40-16.

Make no mistake, this was a complete pasting of the Aussies!