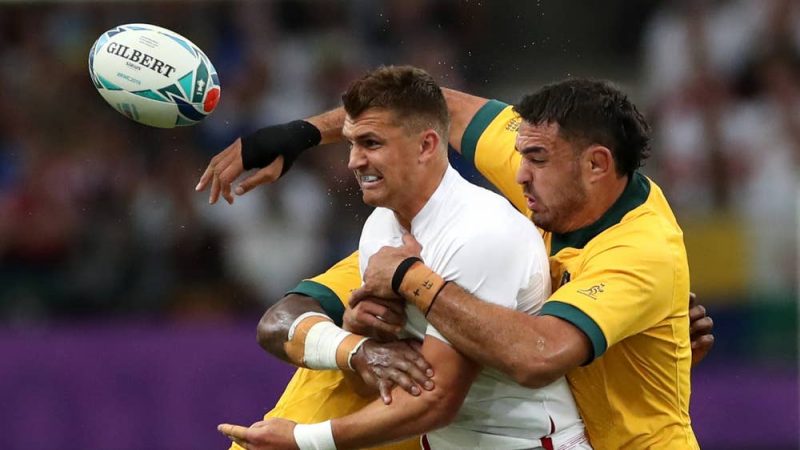 There was lots of singing from the stands for the England anthem, which suggested a more balanced fan presence than expected. Australia matched it and it was ready to go.

Reece Hodge got the game underway and Daly gave Vunipola his first carry before the ball was booted back to Australia.

Slade’s first contribution was to have the ball bumped off him in the tackle, Beale received it and went through the gap and ran 60 metres up to the England 22, but he got so far that there was no support with him. Not that it mattered as England had given a penalty away that Christian Lealiifano lined up, And the Wallaby ten slotted 0-3 Australia to take the lead of the game.

Quarter an hour in, England got the ball out and ran a nice pattern outright to Watson who nearly got away but was scragged, it went all the way left and England were laying siege to the line before Pocock & Hooper got in and nicked it at the breakdown,  England got  the ball back and there was more fast soft hands right to Watson, it was recycled and went all the way left,  with some clever dummy runs in midfield  and past the Aussie  defensive line and May went in right in the left corner for the try,Farrell slotted a great kick from the touchline for England to take the lead 3-7.
Just 2 minutes later Genia threw an interception to Slade and he was away, but he didn’t have the pace to get there from 70 metres so he dinked a beautiful kick on the run for May to gather and he definitely had the pace to get in scoring another English try! Farrell kicked another one from out left successfully to further the lead 14-3.
Shortly after the Wallabies grabbed from the lineout and sent their midfield runners at the England line, Izack Rodda punched a bit of a hole through and when it was recycled Jamie George was pinged for offside and Christian Lealiifano has the simplest of kicks for the penalty 14-6.
Tuilagi got some momentum on a carry and Christian Lealiifano gave away a kickable penalty on 29 mins for not rolling away. Owen Farrell stroked it over to increase the lead to 17-6 to England.

Australia had a scrum in the England 22. on 39 minutes it went down once and Sinckler believed Sio was dropping his bind and screamed “remain!” at touch judge Romain Poite 50 metres away on that side of the scrum to draw his attention. That level of cheeking of officials normally brings a penalty, but the ref let it go, However, the reset scrum brings the Aussies a penalty they should’ve had for that for the last England collapsing scrum and Christian Lealiifano lined it up and smacked the penalty to make it a half time score of 17-9.