The All Blacks Stroll Through Sending The Irish Home 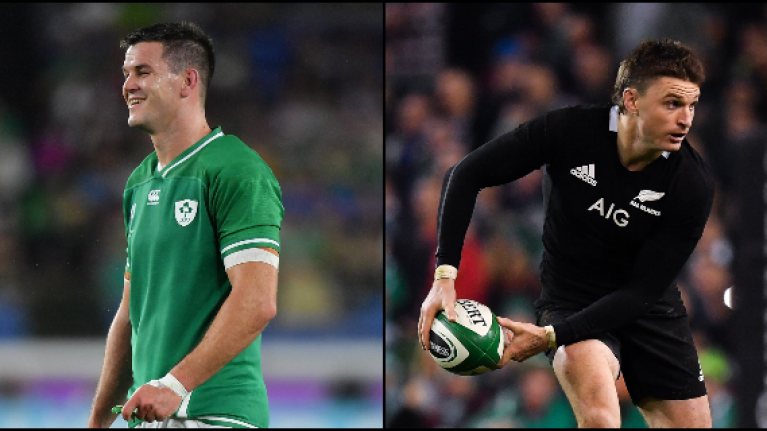 There was an incredible atmosphere in Tokyo as the teams kicked off this quarter-final.

He ruled Ireland left-wing Jacob Stockdale had deliberately knocked on attempting an interception.

It appeared a harsh call with Stockdale a master of picking off opposition passes and it could be argued the speedster should have held on to the ball.

Mo’unga added the conversion and it was already looking a tall order for Ireland as the early scoring took New Zealand 10-0 up.

The All Blacks were applying relentless pressure and forced Ireland into errors when on 17 minutes, Smith nipped in for his second try following an attack that saw left-wing George Bridge beat a number of would-be tacklers to make it 17-0 early on.

10 minutes later on the 30-minute mark, New Zealand increased their advantage when Johnny Sexton attempted to force a pass and the ball broke loose for the All Blacks. They hacked on and arch-poacher Beauden Barrett cruised up to pick up the ball and score. Mo’unga went wide with the conversion attempt making the score 22-0. Ireland made just one serious visit to the New Zealand 22 during a one-sided first half.

New Zealand piled on the pressure early in the second half as Ireland continued to miss tackles. they bagged a fourth try following a scrum 7m from the Ireland line with hooker Codie Taylor the man to eventually go over for Mo’unga to convert making it 29-0.

61 minutes saw the game turn into a real rout and an all black day for Irish rugby with New Zealand substitute Matt Todd touching down for their fifth try to make it 34-0.

Henshaw responded seconds later by powering over from a close-range for Ireland, No.8 CJ Stander having picked up and ran diagonally before supplying a short pass.

Carbery converted but it was too little, too late.

Normal service was resumed as the All Blacks scored a sixth try with dangerous left-wing George Bridge scoring but then just afterwards Ireland were awarded a penalty try with Todd being sin-binned by referee Nigel Owens for being off-side to prevent the ball being grounded against the padding at the base of an upright making it 44-14.

New Zealand added more points just before the end that made it 18 World Cup victories in a row as they subjected Ireland to a record tournament defeat. Final score 46-14.