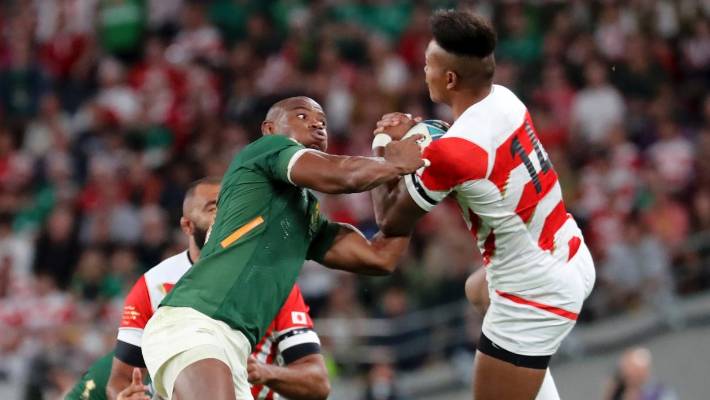 First blood went to South Africa as Tamura fell off a tackle allowing Mapimpi to go over the line on 4 minutes. Conversion missed and the scoreboard was underway 0-5.

It was a terrible start for the hosts with South African set-piece power making a difference – as was expected, although as the clock approached 15 minutes Japan kept the score down and started to attack well themselves. On 18 mins South Africa had another scrum. It was fair to say that Japan were not having the best of it at scrum time. South African power at the first scrum of the match created the first try. But this one brought a penalty for Japan! The players celebrated like they’ve won the match. Huge moment. They kicked for goal and the crowd erupted as they made it 3-5.

The rest of the first half saw some great free-flowing rugby from both sides but it remained a very tight game score-wise, despite being an excellent and exciting tense match between the sides.

A little Daylight, if you could call it that, for South Africa on the scoreboard 3 minutes into the second period as they scored a penalty to extend to 3-8. and then just another 2 minutes later yet another penalty to create some breathing space as Pollard scored again smashing the ball through the posts 3-11.

Pollard cracked another penalty through the posts on 68 minutes with the Spring Boks taking  total control of the game. 3-14.

A minute later From the restart, South Africa won yet another penalty for a head-grab on Kolbe. It looked like Kolbe was lucky not to be penalised himself for tipping the Japanese tackler on to the floor. Too much power, too much precision for the Japanese a big shove from the Boks at a maul and de Klerk went over for a deserved try, after a lovely off-load by Marx making a scoreline of 3-19.

It really was a game of two halves, Japan had simply not been in the match after the break and then it was basically game over as Pieter-Steph du Toit stole the line-out.The host nation supporters sighed as South Africa went over the line again making it 3-26.

Japan had made history by becoming the first Asian quarter-finalists at a Rugby World Cup. They had been outclassed and overpowered in the  second half but what memories they’ve given us at this tournament.The Brave Blossoms were out. South Africa go into the semi-finals.