The Long and the Short of It: The Effects of the Great Depression

The Great Depression, which lasted between 1929 and 1939, had far reaching consequences in the United States as well as in multiple first, second and third world countries. Initiated by the Wall Street Crash, it halted what was considered to be a time of great economic prosperity, resulting in widespread poverty and distress, in what to some felt like an overnight occurrence.

The severe negative effects of the Great Depression were immediate, and to this day this historic event affects global economic policy and political decision-making, as well as the way consumers from all walks of life invest and spend their hard earned money. 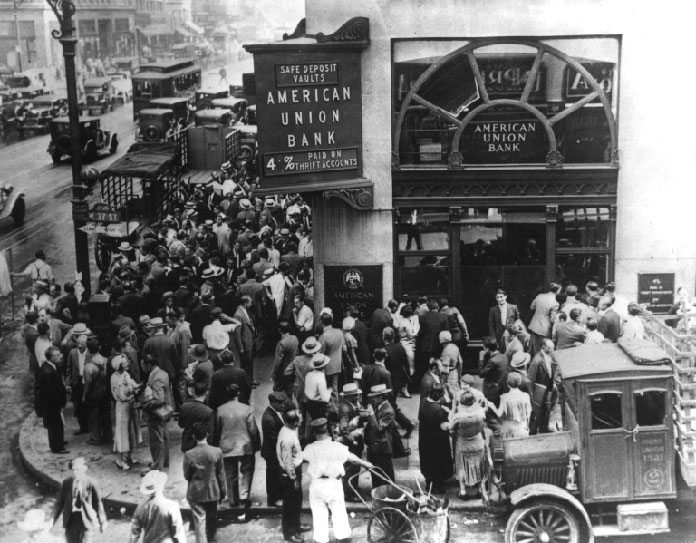 What Was the Wall Street Crash?

The Wall Street Crash of 1929 is known as the primary initiator of the Great Depression, and the two cannot be mentioned independently. The crash triggered one of the darkest times in the global economy, acting as a catalyst for the downturn that was to follow.

The economic boom the United States experienced in the 1920s led to many people over-investing in the stock market, with some going so far as to gamble their entire life savings on it, often solely based on the fact that their friends, work peers and neighbours were doing the same. Banks were excessively flexible in their lending, salaries were consistently on the increase and people chose to follow over-optimistic sentintiment, wrongly believing that the economy would be prosperous for decades to come.

The Day of the Crash

The problem was further compounded by excessive speculation, in conjunction with outrageous valuations, and soon some analysts started to predict that the bubble was going to burst. Fear starting to trickle in through the media, resulting in widespread panic.

The first significant dip in the stock market was seen around the 4th of September; less than two months later, on what would famously become “Black Tuesday”, the stock market crashed, following the mass exodus and sale of shares, resulting in plummeting stock prices and effectively sending the US economy into an immediate downward spiral, ushering in the Great Depression in its wake. 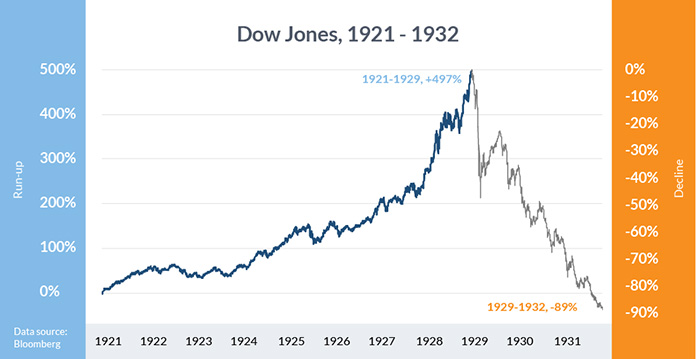 What Was the Great Depression?

History.com refers to the Great Depression as “the worst economic downturn in the history of the industrialised world”. Over the span of a decade following the Wall Street Crash, it saw people of all classes lose most of what they owned. Businesses started to tumble over as consumer pockets tightened, and widespread poverty escalated to new levels that had never been seen before.

The fallout was tremendous, with the Dow Jones seeing a close to 90% decline in the space of just a couple of years as the Depression tightened its grip. This had severe consequences locally in the States, which eventually started to trickle into other economies, escalating the Great Depression to a global historical event. This would forever change the economic landscape and shaped the way people would spend and invest throughout the rest of the 1900s.

Immediate and Long Term Effects of the Great Depression

The immediate effects of the Great Depression include the major decline of personal and household income in the US, escalating poverty and leaving families with little to nothing. This led to subsequent losses in government tax revenue as well. Prices dropped and profits plummeted, sending the economy into further spiral. A quarter of American adults in the US were unemployed during the Depression, creating an air of hopelessness and despondency from citizens.

Investopia suggests that the federal government should always prioritise action in an economic downturn, as in the Depression many people were forced to rely on themselves, but as with any major event, the effects aren’t always all bad. A positive effect of this time is that systems were put in place to ensure that in times of crisis, the government can be held accountable.

The long term effects of the Great Depression were felt beyond the borders of the United States, in rich and poor countries. 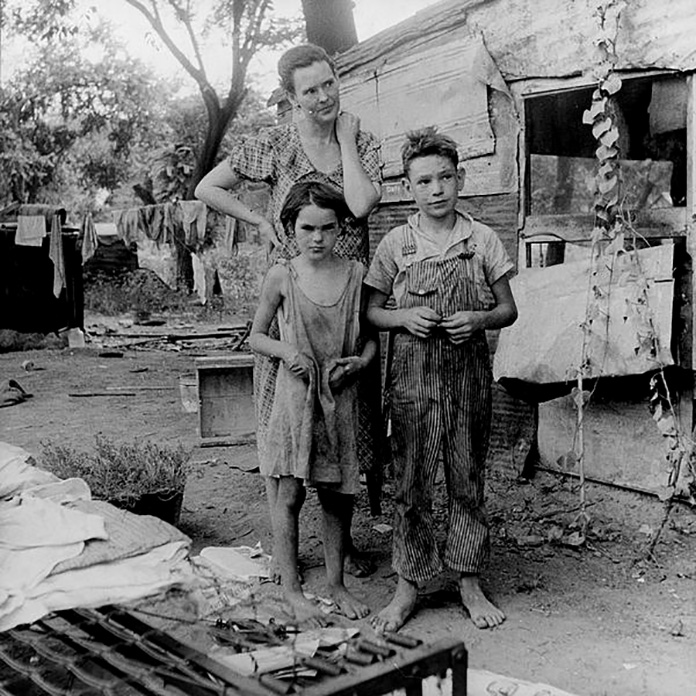 It took around 25 years for Wall Street to recover. To some, the poor global economic outlook is seen as a vital contributor to the eventual start of World War II in 1939, which marked the end of the Great Depression, but initiated a time of further struggle and strife for the people.

Does the Great Depression Affect Us Today?

While we’re marching steadily towards 100 years since the start of the Great Depression, to this day it still has a widespread effect on inflation, trade, the stock market, the banking sector, employment and, of course, it has had far reaching social and political implications too. It affected an entire generation of adults and their children, resulting in a changing global landscape and altering the way baby boomers (and to some extent, even millennials) approach investing and saving.

The Great Recession of 2008, which pales in comparison but nevertheless had similar contributing factors, served as a similar reminder that economies are volatile, and any economic prosperity should not be taken for granted. To academics, the Great Depression is seen as an important case study for how quickly the global economy can decline, with many still studying its causes and effects to this day.

The Great Depression had far-reaching short and long term effects that may have originated in the United States, but ultimately were felt all over the world. The Wall Street Crash of 1929 will never be forgotten, and the ensuing years of economic downturn, coupled with the imminent threat of war that became a reality in 1939, meant that people from all walks of life had to group together, learn some hard lessons, and discover that periods of economic prosperity, albeit big or small, should be cherished and nurtured, without the expectation that it is something that will last forever.