Copy Of Boris Letter To Corbyn This Evening. 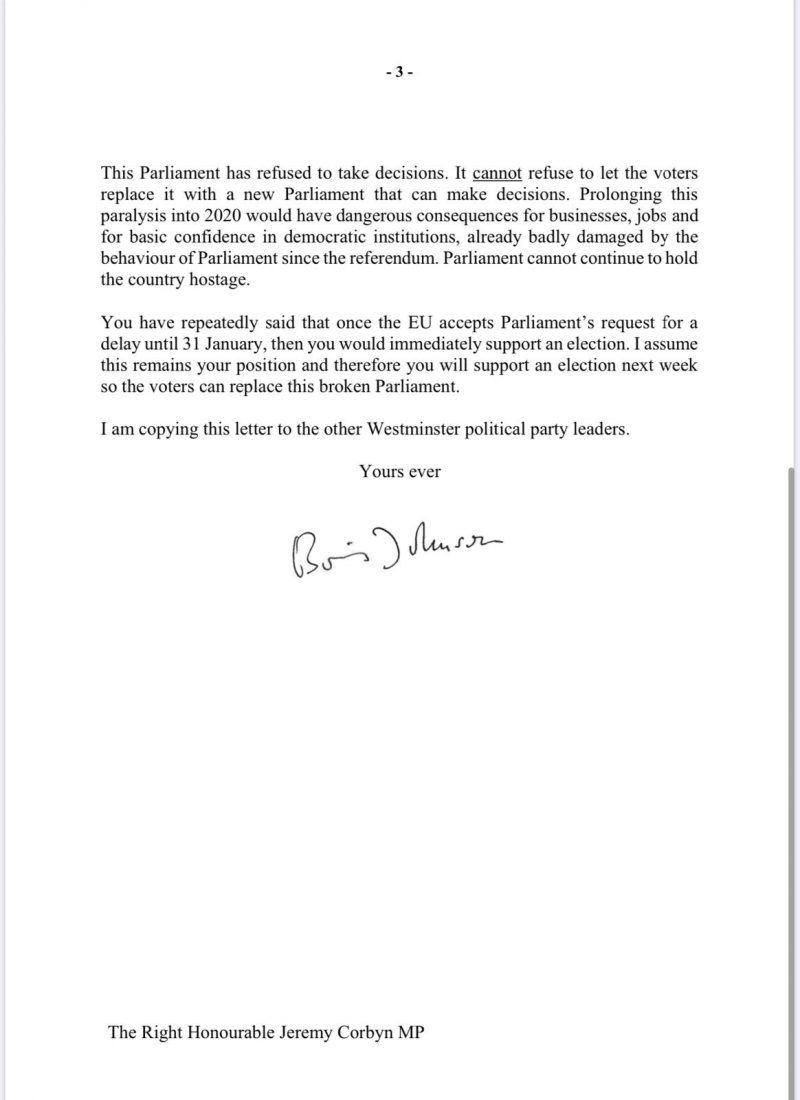 Last week, I agreed a new Withdrawal Agreement with the European Union. This is a great new deal which Parliament could have ratified and allowed us to honour our promises and leave by 31 October. Sadly you succeeded in persuading Parliament to ask the EU to delay Brexit until 31 January 2020.

On Tuesday, the Commons voted for our new deal but again voted for delay and, even worse, handed over control of what happens next to the other EU member states.

I have repeatedly made clear to EU leaders since I became prime minister that I believe any delay to be extremely damaging for the country and my view has never changed that we should leave on 31 October.

However, it is clear from public and private comments of President Tusk that it is likely that the EU will offer a delay until 31 January, though it is possible that a shorter delay will be offered.

In our meeting yesterday [Wednesday] you suggested that we propose a new timetable for getting the Withdrawal Agreement Bill (WAB) through Parliament.

This Parliament has, with your encouragement, voted repeatedly for delay. The vote on Tuesday was Parliament’s last chance to get Brexit done before 31 October and it voted, again, for delay.

I am extremely sceptical this habit will change and many will doubt that this Parliament will do anything other than waste more time and then, in January, ask for yet another delay.

These repeated delays have been bad for the economy, bad for businesses, and bad for millions of people trying to plan their futures. If businesses assume that this Parliament will stay, paralysed, refusing to take responsibility for month after month into 2020, it will cause misery for millions.

It is our duty to end this nightmare and provide the country with a solution as soon as we reasonably can.

The EU may offer only a short extension, say to 15 or 30 November. This would, obviously, be my preference but I was legally prevented by Parliament and the courts from suggesting this. In this circumstance, I assume you will reverse your vote of Tuesday and you will co-operate with me to get our new Brexit deal ratified so we leave with a new deal rather than no deal.

If the EU offers the delay that Parliament has requested – that is, we must stay in until 31 January – then it is clear that there must be an election. We cannot risk further paralysis.

In these circumstances, the Commons will vote next week on whether to hold an election to be held on 12 December. This would mean that Parliament would dissolve just after midnight on 6 November.

If you commit to voting for an election next week (in the event of the EU offering a delay until 31 January and the government accepting, as it is legally forced to do by Parliament), then we will make available all possible time between now and 6 November for the WAB to be discussed and voted through, including Fridays, weekends, the earliest starts and the latest finishes.

This means that we could get Brexit done before the election on 12 December, if MPs choose to do so.

But if Parliament refuses to take this chance and fails to ratify by the end of 6 November, as I fear it will, then the issue will have to be resolved by a new Parliament.

An election on 12 December will allow a new Parliament and government to be in place by Christmas.

If I win a majority in this election, we will then ratify the great new deal that I have negotiated, get Brexit done in January and the country will move on.

If you win a majority, then you will, I assume, implement your policy: that is, you will ask for another delay after 31 January 2020 to give you the time both to renegotiate a new deal then have a referendum, in which you may or may not campaign for your own deal.

It is time for MPs finally to take responsibility. More people voted Leave in 2016 than have ever voted for anything. Parliament promised to respect the referendum result. But Parliament has repeatedly avoided doing this.

Given this situation, we must give the voters the chance to resolve this situation as soon as reasonably possible before the next deadline of 31 January. We cannot risk wasting the next three months then this farce being replayed with yet another delay in January 2020 and still no way for the country to move on.

Prolonging this paralysis into 2020 would have dangerous consequences for businesses, jobs and for basic confidence in democratic institutions, already badly damaged by the behaviour of Parliament since the referendum. Parliament cannot continue to hold the country hostage.

You have repeatedly said that once the EU accepts Parliament’s request for a delay until 31 January, then you would immediately support an election. I assume this remains your position and therefore you will support an election next week so the voters can replace this broken Parliament.

I am copying this letter to the other Westminster political party leaders.