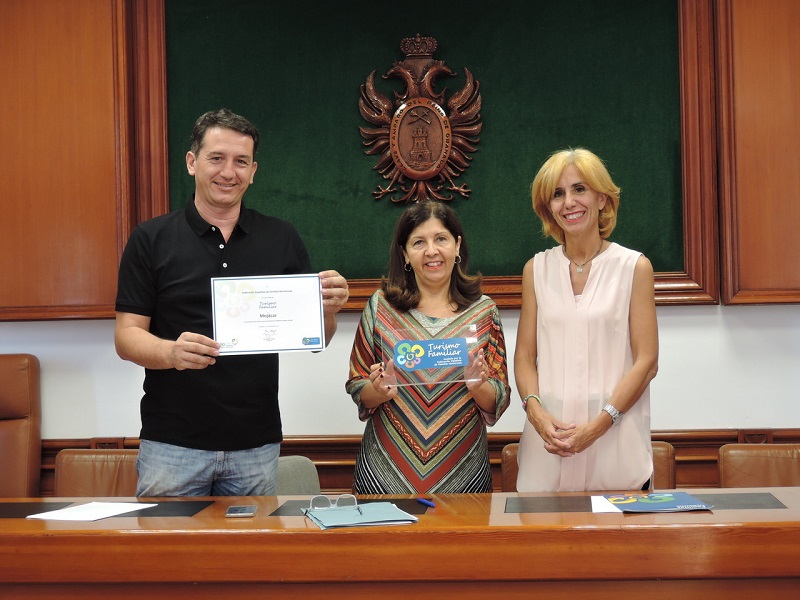 MOJACAR has once again got an official stamp of approval as a quality family tourist destination.
The municipality has revalidated for yet another year the Family Tourism Stamp quality guarantee awarded by the FEFN Spanish Federation of Large Families to distinguish and promote establishments and holiday destinations which appeal to the family-orientated market.
The federation first recognised Mojacar in 2017, the president Cecilia-Rodriguez-Hesles presenting the certification to Mojacar Mayor Rosa Maria Cano and Tourism councillor Emmanuel Agüero.
The municipality was the first in Andalucia to gain the distinction, which was originally launched in 2013, and which is recognised by the Secretary of State for Tourism.
The council has since 2017, it says, been taking steps to extend and improve the municipality’s offer to family groups.
The local authority maintains the recognition as a quality family resort is well-deserved, pointing to the excellence of Mojacar’s beaches, its local cuisine, its leisure offer and its services. The council also points out it forms part of the prettiest villages in Spain network, has the Spanish Institute for Tourist Quality ‘Q’ certification, and several of its beaches have earned EU and SICTED blue flags.
The renewal of the municipality’s family tourism stamp followed a federation audit to ensure it complies with the requisite family-orientated strategies and management, provision of facilities and services, of activities and leisure activities for this sector of the market, and that there is Mojacar marketing focusing on families.
If you have enjoyed this news article, please note that our current charitable activity is on behalf of Ciudad de los Niños orphanage in Malaga.
If you would like to make a small contribution to this cause it would make a great difference to the orphans of Malaga!
Please donate at: https://www.gofundme.com/f/beunited-for-malaga-orphans

Share your story with us by emailing [email protected]roweeklynews.com, by calling +34 951 38 61 61 or by messaging our Facebook page www.facebook.com/EuroWeeklyNews