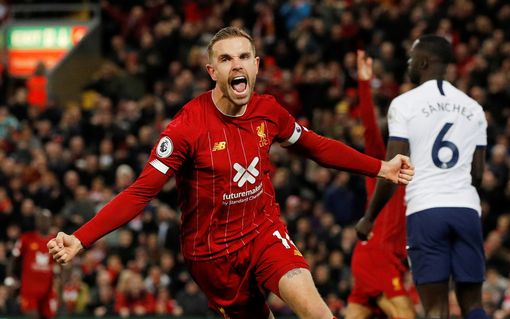 Spurs in their home kit kicked off from left to right at Anfield.

It was a terrible start for the league leaders as Harry Kane scored from basically the kick-off on 47 seconds.

Kane was onside and Spurs went ahead as Son came infield onto his right foot and whacked 20-yard shot that took a deflection off Lovren and hit the post. It rebounded to Kane, who stooped to steer a header wide of Alisson from eight yards.

Liverpool just didn’t seem in the game at all and on 24 minutes almost a second goal for Spurs, Kane’s cushioned volley was just too far in front of Alli, who would have had an open goal, and then Eriksen mishit a volley that bobbled just wide. That said, it might have been disallowed for offside against Kane had they scored.

Shortly afterwards on 27 minutes, Gazzaniga made a vital double save for Spurs. He stretched a long way to his left to palm away Salah’s rising drive from the edge of the area, then got to his feet quickly to block Firmino’s follow-up. He should maybe have pushed Salah’s shot behind for a corner; if it was a mistake, he redeemed it with the second save.

2 minutes later Gazzaniga made another good save, leaping to tip van Dijk’s close-range header over the bar. It came from a beautiful dipping free-kick by Alexander-Arnold on the right.

Just after Mane missed a great chance, flicking a header wide from Alexander-Arnold’s stunning pass/cross. It was a brilliant ball, lofted over the defence from a very narrow position as Liverpool started to show some of their more established form.

The half saw Liverpool have 79% of the possession but no real cutting edge and with currently 3 points between them and second-placed Man City they needed to shape up for the second half.

That’s exactly what they did, less than 10 minutes into the second half, Fabinho floated a nothing ball into the area towards Firmino, who went over after a little shove from Rose. While everyone was appealing for a penalty, Henderson guided the bouncing ball into the far corner with his left foot with an excellent finish.

74th minute Serge Aurier did well to get back and dispossess Mane but then he kicked the back of Mane’s leg as he tried to clear. It was a clear penalty, Salah smashed it into the back of the net to give the league leaders the lead for the first time in the game.

The last 15 minutes Liverpool just basically saw the game out in style maintaining possession and hardly letting lacklustre Tottenham in the game, without Kane in their side they would have even larger issues as they have now.

As for Liverpool not their greatest game but dug it out and played like champions.

2-1 Liverpool and remain 6 points clear at the top of the table.