Tears Will Flow In The Valleys Tonight As Wales Go Out 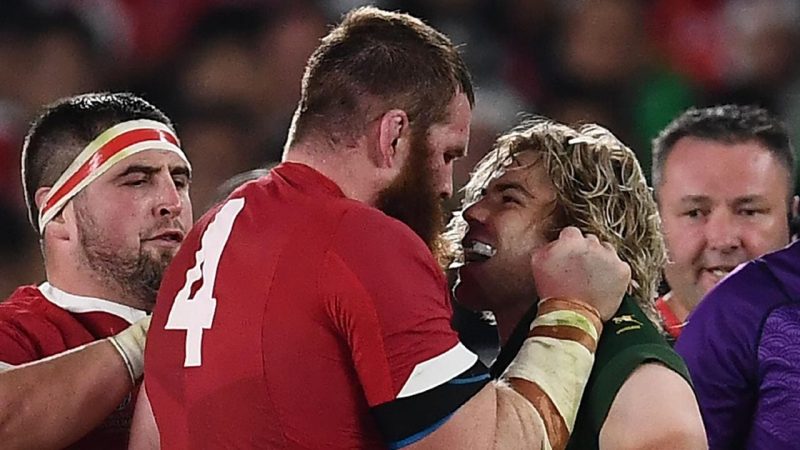 The big day was finally here for the Welsh.

Wales took on South Africa in the Rugby World Cup semi-final in Yokohama.

A moment’s silence took place for the victims of Typhoon Hagibis.

Then the anthems. Hen Wlad Fy Nhadau was typically spine-tingling.

Game underway saw a good first take for Leigh Halfpenny in the air but the Springboks did well to hold him up in the tackle and get the put-in at the scrum.

Physical first 15 minutes were played when South Africa got a penalty as Tipuric got caught the wrong side of a ruck Pollard lined up the shot at goal and nailed it 0-3.

Great work though by Jon Davies straight after and North got Wales outside the Boks’ defence.

They scrambled to stop Josh Adams but strayed offside.

Biggar had his first shot at goal. It wasn’t an easy one but he nailed it in Biggar style. 3-3

21minutes into the first half saw a big scrum by South Africa that earnt a penalty. Pollard lined it up and stuck it through the uprights to retake the lead for his side. 3-6.

Wales were hanging on due South African pressure, but the intention was clear the Boks were trying to take the legs out of Wales with their physicality It was paying off as Ken Owens gave away a soft penalty at the maul. Pollard nailed it 3-9

On 39 minutes it was all going on, Wales had a penalty advantage for a cheap shot by Vermeulen off the ball on Wainwright but Biggar put it up aerially but North’s hamstring seemed to go chasing it. North went off, replaced by Watkin as Biggar smacked the ball with full Welsh passion through the posts bringing the score to 6-9. Just after the whistle blew for half time.

The teams came back out leaving 40 minutes for Wales to make history for themselves. Straight into the second half saw a Big error from Faf de Klerk. He dropped a Halfpenny kick into touch. Wales got a penalty from the lineout as Etzebeth jumped across the lineout. Biggar lined up a shot at goal and scored, Wales were level 9-9.

South Africa started to put on the pressure in the 58th minute and Wales could not live with it. The penalty advantage was there but Damian de Allende went through the tackles of Tomos Williams and Biggar to force his way over the line. It was a massive try in such a tight scoring game. With the conversion scored as well the score drastically changed to 9-16.

Wales were determined though and went through 21 phases but they couldn’t break through.Penalty came but they went for the scrum This was a bold move and the tactic payed off, It was ballsy, but they got it away. Moriarty. Williams. Davies then Adams over in the corner! Patchell then nailed the extras and game was levelled 16-16.

10 minutes were left to decide who would make the final V England but with just 5 minutes left of normal play South Africa won a penalty and scored what looked like could shatter Welsh dreams as they went ahead 16-19. The whistle shortly blew and the Welsh dream sadly was over.