Cocaine hauls in Marbella and Madrid 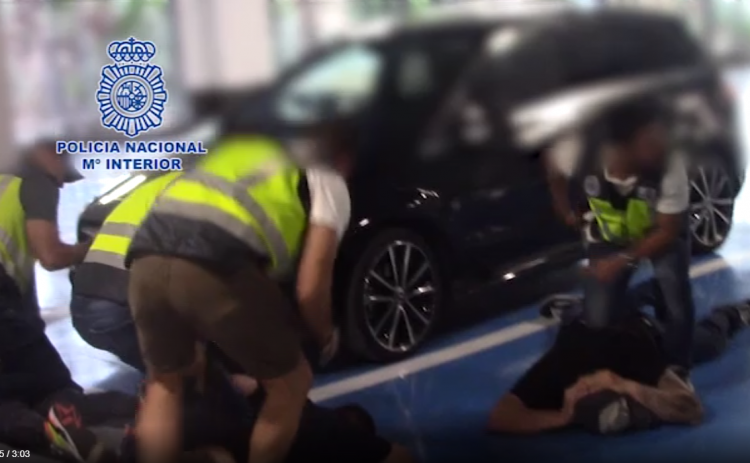 POLICE have seized 101 kilos of cocaine from a Marbella shopping centre as part of a 621 kilo haul from the dismantling of two drugs syndicates.

Officers have arrested five people, of Colombian and Brazilian nationalities, as allegedly responsible for the possession and transportation of the drug once it was smuggled into Spain.

Investigators found 400 kilos of cocaine in a warehouse on an industrial estate in Madrid, 120 kilos of the drug in the car park of a company in the capital as well as the Marbella haul.

National Police officers, who had been working with the USA’s Drug Enforcement Agency and the Office of the Attorney General of Colombia, also seized €11,000 cash, 10 mobile phones and six vehicles.

The operation began last February when police discovered and the Madrid warehouse stash of 400 kilos. Using international police cooperation channels, collaboration began with the Colombian and North American authorities in order to trace the origin of this shipment to Spain.

As the investigation progressed, agents learned that the organization behind the shipment was planning to send another major consignment of cocaine to Spain.

Shortly after, investigators realised the shipment had arrived in Spain and the locaql organisation had started to move it.

This was when police saw that a Colombian man – previously arrested in 2012 for his alleged involvement in a murder – who was in charge of transporting the cocaine alongside a compatriot.

From then on, the investigations focused on finding out where they were going to hide the drug, as well as finding other criminals involved.

In September, a surveillance operation tracked the two Colombians as they drove in two vehicles to a company car park in Madrid, taking extreme caution to try and avoid being followed.

They parked and left, before returning two hours later to remove the cars.

Police moved in, checked the cars and found the cocaine. Both men were arrested.

Subsequently, researchers learned that a second organisation intended to make a delivery of 101 kilos of cocaine in Marbella.

A Colombian subject would be in charge of supporting and collaborating with the transport while two Brazilian citizens acted as brokers for the organisations that sell cocaine in southern Spain.

Little did they know the drugs transfer was by now being run by the police.

They chose a commercial centre to collect the drug. There, the Colombian and one of the Brazilians arrived to pass over the batch of cocaine and were arrested by the agents. They also arrested a third person, of Brazilian nationality, who was waiting in the mall to make sure the transaction was carried out correctly.