Bercow Goes Out Blazing On His Last Day Of Duty 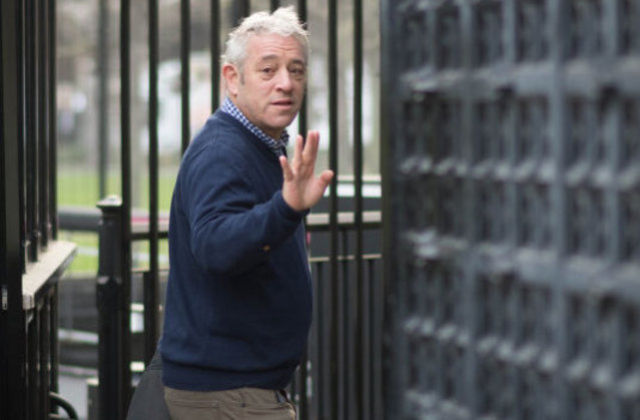 John Bercow has been accused of “defending the indefensible” to the “fag end” of his tenure as Speaker during a furious Commons bust-up.

The Speaker became involved in the row on his last day of duty as speaker in the House Of Commons with long-term nemesis MP Andrew Bridgen as MPs debated a report to suspend Labour’s Keith Vaz, who was found to have “expressed willingness” to purchase cocaine for male prostitutes by the Standards Committee. The fierce exchanges came after MPs had spent almost three hours paying tribute to the Speaker as he prepared to stand down after 10 years in the chair.

Mp Bridgen said he originally made the complaint about Mr Vaz to the Standards Committee before suggesting Mr Bercow should have acted earlier on other allegations connected to the MP for Leicester East.

Speaker Bercow interrupted Mr Bridgen and at length informed him about how these were not matters for the chair to get involved in given the other procedures in place.

But Mr Bridgen said the Speaker had misunderstood his point and in fact he was going to “extol” his decision not to get involved.

As he tried to raise other concerns connected to Mr Vaz, Bercow again intervened and strongly warned Mr Bridgen to conclude his comments.

In their final exchange, Mr Bridgen said to the house “It’s clear to me and it will be clear to the public that to the fag end of your tenure in that chair you are defending the indefensible and your very close relationship with Mr Vaz the House can come to its own conclusions, the Standards Committee has come to its own conclusions and, Mr Speaker, the public will come to theirs.”

Mr Bercow replied he  said ” I’m sure the public would come to their own conclusions, he can try to smear me, he will get the square root of nowhere.”

Bercow then commented  he was “friendly” with Mr Vaz as well as Conservative former ministers Sir Christopher Chope and Sir David Lidington,  and then went on to name people from different parties he was also friendly with.

He  Said “I am friendly with a great many members having served in this place for 22 years, I do not get involved in matters appertaining to standards, there is a machinery for deliberation on those matters in the form of a parliamentary standards commissioner and a committee.They deal with those matters.”

Finally the speaker flew into full rant mode finishing with “Mr Bridgen has appeared to contradict himself within minutes, I’m not trying to defend the conduct of Mr Vaz What I’m doing on behalf of and in support of this House is defending colleagues, members of the public, the integrity of an independent process. If (Mr Bridgen) can’t or won’t grasp that fact, with the very greatest of respect to him or such respect as I can muster, that says more about him than it does about me.”