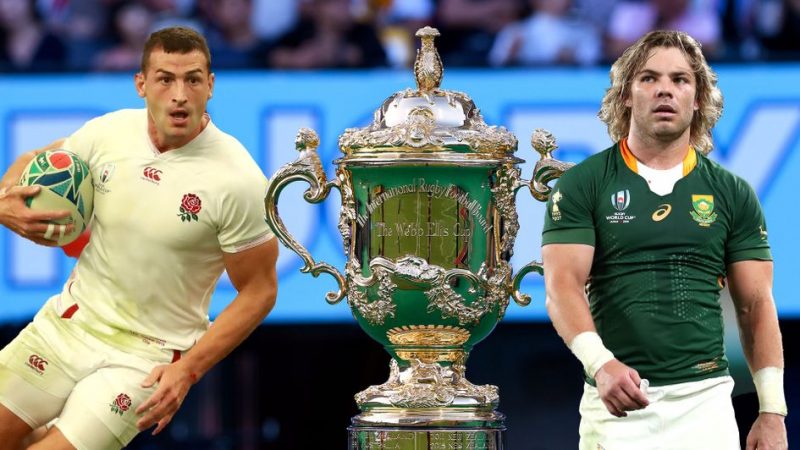 The drummers were drumming for the final time as the squads filed past them on the field. There was something of a quiet swagger to England, it had to be said.

The teams bellowed out their national anthems with pride, South Africa’s anthem is in three languages and speaks of their love of their land and people. England’s is of course about the nations queen.

72,000 packed into the stadium awaited the kick off.

Handre Pollard chipped the ball long into the England 22 and the final was underway!

Early penalty for South Africa as Lawes didn’t roll away. Garces was very quick on the whistle so had set his stall out early. Pollard gratefully pointed at the sticks but then put it wide right with a nervous looking kick.

England were putting no-one into the rucks and allowing South Africa to recycle quickly, but Garces loudly blasted his whistle as Sinckler was prostrate on the floor after he ran into Itoje’s shoulder in a tackle on Mapimpi.

Game over for the tight-head as he was clearly out cold and had to leave the field. Thankfully he came round to walk off rather than a stretcher.

South Africa’s scrum pushed England back like a wheelie-bin and won a penalty which Faf De Klerk tapped and went quickly. It’s worked out to Kolbe who juggled and held it before Tom Curry managed to nick it at the breakdown in their own 22. They cleared after May carried it out of the danger area.

Willie Le Roux kicked from deep and Pollard got to it ahead of Ford in the England half. Le Roux was already more active in this game as an attacking threat than in the whole of the Wales match. England couldn’t get nothing going at present and had another scrum to deal with and gave the chance for Cole to show he could hold Mtawarira back.

England held the scrum this time and Vunipola picked from the base and shovelled a despicable pass to Farrell which put his captain under pressure in his own 22. He tried to run it out but Garces again did not like England in the breakdown. Penalty for Pollard to launch at the posts and he settled his nerves and scored 0-3.

England were, frankly all over the place. From a lineout in the SA half they recycled and Ben Youngs threw a complete howler of a pass miles over Watson’s head and into touch. They had entirely too little platform and composure at this point.

South Africa scrum on 14 minutes on their own 10m line was solidly won and possession was kicked away to England, Ford decided that it was time to end the nonsense and launched a massive kick to turn Le Roux around and force him into giving England a decent lineout position in the SA half. A lineout they subsequently lost as they knocked on due to Etzebeth getting up and in the way enough.

Just 2 minutes later another scrum, another penalty to South Africa, this time against Mako Vunipola. Jonny May jumped and punched the ball back in play from Pollard’s touchfinder and Daly sent it back up the field and into touch. It was magnificent work from May.

May marked a kick under pressure from Kolbe and after the clearing kick Du Toit was offside. England had another chance to finally do something from an attacking lineout on the SA 22.

England won the lineout cleanly and started putting some familiar carrying patterns together in the 22 and won a penalty after Kolbe stuck his hands in on the floor.

3-3 Owen Farrell slotted the penalty through the sticks! England levelled the score.

In the midst of all the action, Mbonambi had to leave the field for a head injury assessment, Malcolm Marx replaced him, and Lood De Jager had done some serious damage to his arm and was replaced by Franco Mostert.

England finally got a toe-hold and then mangled receiving the restart to give SA a scrum in the England half. England held it up before SA popped up on their loose-head side and Garces gives a penalty to South Africa. Pollard struck again 3-6 although it looked a suspect penalty choice by the ref.

Ford kicked the ball out from outside his 22 and SA had a lineout in the England half all the way back from where he kicked it. Eben Etzebeth went down requiring treatment.

England had a penalty for offside on halfway after South Africa worked a few phases, which included getting the ball through hands  before it was knocked it on. The ball went in touch near the SA 22.

England secured the ball and a good carry from Underhill got them over the gainline and into the Bok 22. Many more carries followed and they were up to 5 metres but were repelled constantly by the green wall. There was a penalty coming for England but still they pounded near the line.

The ball was incredibly slow coming out and the one man up carries were not working, so it went out to Watson on the wing but the SA drifted defence was up to it. It came back all the way left to May and after 25 phases of going nowhere Garces finally called no advantage and it was be a kickable penalty that Farrell slotted home to level the score 6-6.

Le Roux was at first receiver on 37 minutes and launched a deep cross kick that Mapimpi gathered in the England half. SA were spraying it left and right, which showed a real change in plan from earlier in the tournament. The Boks had a penalty for Underhill in at the side. You just knew what Pollard would do with this, and he inevitably called the kicking tee on. It’s was a long way out and right but he hit it home to take the lead again 6-9.

Two minutes later De Klerk busily ran from the base of the ruck and threw it long to De Allende who fed and the SA centre went through a gap. He kicked it on and Daly spilled while attempting to gather the bouncing ball. It was a Scrum South Africa on England’s 22 and the full Bok pack gave it a shove and won a penalty, Pollard struck again and extended the lead 6-12 as the half time whistle blew.

Ford sent it deep to get the second half underway and the ball was returned to touch. Courtney Lawes was off for George Kruis. Eddie Jones clearly wanted some more in-tight shutdown from his pack for the second period. A solid episode of possession for England ended when Ford up and undered the ball to Le Roux, but England had it back again and already this  looked better from them.

Faf De Klerk was putting in a defensive performance, ferocious across the whole defensive line as his team repelled everything England tried, it was all very lateral and in the end England knocked on. Kitschoff and Koch were on before the scrum and SA pack powered the England eight again for another penalty. Pollard struck again 6-15. SA were kicking England to death.

Now ten minutes in to the second half from the lineout it was an SA knock-on and England finally won their own scrum penalty. Farrell lined up to kick sticks and scored 9-15.

Another penalty for England on 53 minutes as Curry clamped onto Pollard on the floor after Watson’s tap tackle on the Bok and it was not only a penalty to England but a kickable one. It was 45 metres out and to the right but Farrell pulled slightly and missed.

Elliot Daly was turned just after by a Le Roux kick and his return to touch was sliced horribly. SA caught and drove the lineout and won a penalty at the maul and Pollard once again had the chance to pull his team away immediately after England got back into the game and did so by striking home yet another kick. it was a nine point lead with a quarter to go but then England From the restart  saw Tuilagi absolutely smash Vermeulen as he gathered and then the SA number 8 eight hung on and Garces awarded the penalty. Farrell slotted it to go 12-18 but time was running out now for England.

68 minutes saw what looked like the deciding factor of the game as SA got a penalty on Englands 10m line which was won without incident. Le Roux was in the line again and sent a probing chip into the corner which Daly gathered but England were forced to exit. On the return Am gathered a chip from Mapimpi and they ere into the 22 and Am threw a lovely no look pop back to Mapimpi and he was in. Ref wanted to check Am was onside and called the TMO but the try was given, the first they have ever scored in a World Cup final. With the conversion extra’s the score moved onto 12-25.

England’s World Cup dreams were over on the 75th minute. England again were trying to work in midfield in their own half but Slade dropped the ball as he was rattled in the tackle. It rolled to Kolbe and he danced around Farrell to run in from 30 metres. Pollard slots the extras. 12-32. Game over bar the shouting and South Africa played out the final 5 minutes to become World Cup winners for 2019.