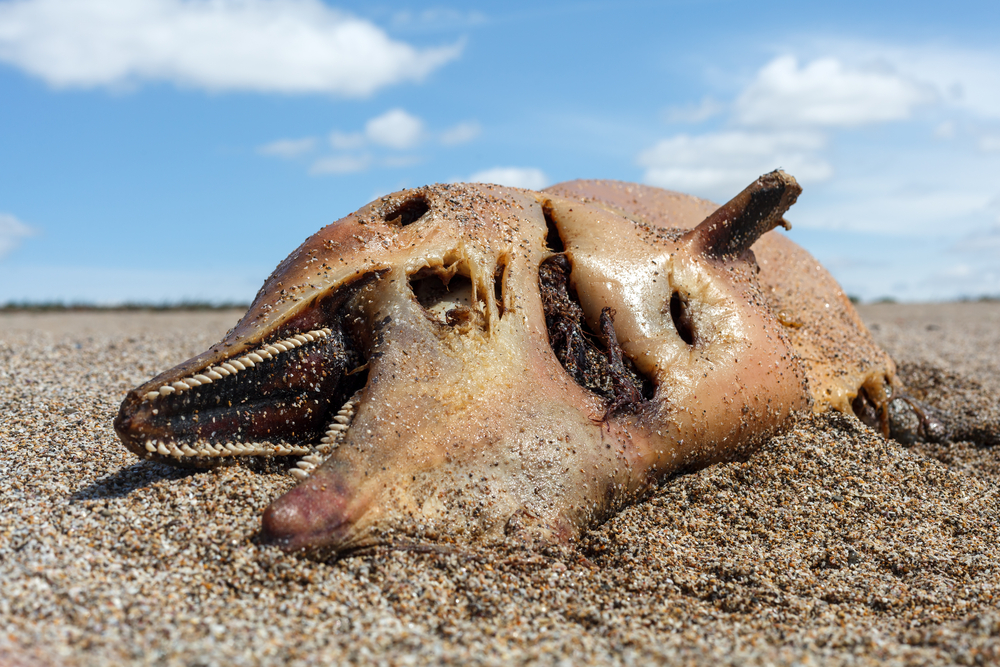 LOCALS fear a shark may be lurking somewhere along the British coast after a dead dolphin washed up – which looks like it was bitten in half.

Macabre pictures showed the bottom half of the dead dolphin completely missing and on the upper half there appeared to have bite marks from large teeth.

Fisherman in the area worry that as the animal appeared to have been bitten in half it could prove a massive predator is stalking the south coast.

Rumours of a Great White Shark stalking Britain have been prevalent for years. Fishermen from Devon claim to have seen sharks roaming in southern waters earlier this year.

There is the possibility that the damage to the dolphin could have been caused by a boat propeller or other sea creatures eating it after death. However on closer examination of the carcass, the teeth marks are evident.

On-lookers said they believed the sickening state of the creature’s remains on Harlyn Bay near Padstow, Cornwall, could have been the result of an attack by a shark.

One witness stating: ‘My initial thought when I saw it was a shark attack. I just can’t think of anything else that could have done this… It is terrifying if true. The flesh wouldn’t have just rotted away like that.’

Rob Stevenson from local community interest company Beach Guardian CIC said: “We do regular beach cleans from Padstow to Porthcothan and people locally contact us if they find any ropes, nets etc.

“One of our volunteers was dog walking on Harlyn Bay when they saw it in the water and took a photo and sent it over so I went down for a look. The tide has now retreated so it’s sitting at the high tide mark.

“We want to make people aware there’s a dead dolphin on the beach, particularly dog walkers as a lot of inquisitive dogs will go over for a look.

“It’s a sad picture and terrible to see but we can’t really speculate as to how it died.”