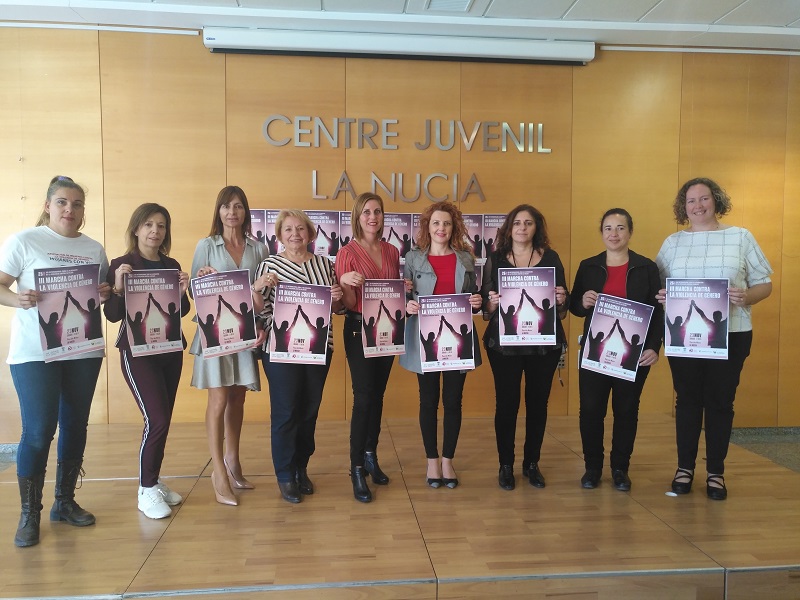 International Day for the Elimination of Violence Against Women

VILLAJOYOSA has signed up to the 3rd Marina Baixa Regional March against Gender Violence, which will be staged in La Nucia on November 23.
Organised by the Marina Baixa Regional Equality Council to mark the International Day for the Elimination of Violence Against Women, the march will begin at 5pm at the Plaça dels Musics with a priority objective of getting young people involved.
Villajoyosa council stressed the idea of initiative is to raise awareness about the need to take measures to eradicate this social problem, which not only affects women as the direct victims of abuse and physical and psychological abuse, but also those around them. By focusing the action particularly on the younger generation this year the hope is that they will act as agents of the necessary social change.
As every year, a number of different women’s associations and survivors of domestic violence will be taking part. Participating collectives include the Asociacion Mujeres con Voz (Women with a Voice Association) and the Associacio de Dones de La Nucia (The La Nucia Women’s Association), who will lead the way around the streets of the town, going along the Avenida Carretera up to Avenida Porvilla and up to the El Cirer social centre.
La Batukada Jam will be providing the musical accompaniment to the marchers. And when they get to the social centre local saxophonist Roman Rodriguez will perform.
Youngsters from every Marina Baixa region municipality represented on the council will then read out the manifesto, after which there will be a performance of a gender violence-related work by the La Nucia Dance School.
Locos de Atar, a group which won an Against Gender Violence award in a Women with a Voice Association-organised initiative, will then provide the suitably activist entertainment.
The Marina Baixa Regional Equality Council is formed by the local councils of Finestrat, La Nucía, Villajoyosa, Altea, Callosa d’en Sarria, Polop de la Marina, l’Alfas del Pi, Benidorm and the Marina Baixa council association. Its goal is to carry out joint awareness-raising campaigns on gender equality and the prevention of gender-based violence.
“This 3rd Regional March against Gender Violence aims to raise awareness among the population about this social scourge”, commented Villajoyosa Equality councillor Asun Lloret.
“It’s important that all the Marina Baixa municipalities get involved in this march and that we go hand-in-hand to fight against this serious problem which inhibits many women and does not allow them to live their lives safely, even costing them the lives of 50 women so far this year”, the councillor added.
“Sexist violence is one of the main problems in our society, and with actions like this we can transform the current social reality into a reality which favours free, strong and safe women”, she declared.