Flagship of the Skies 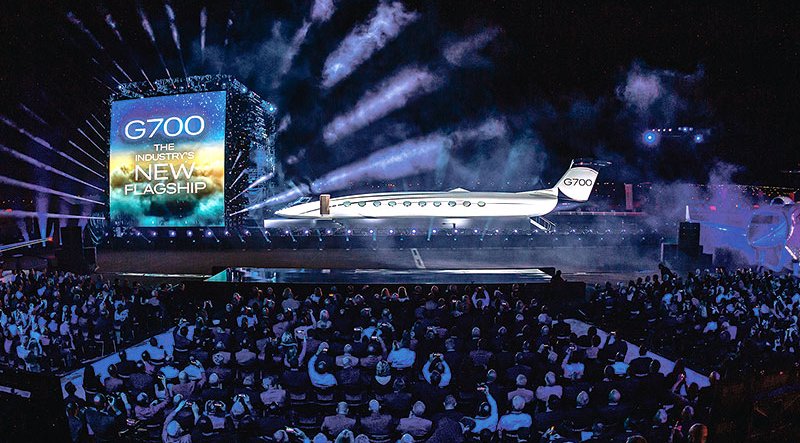 October and at the air show promoted as the biggest business aviation show in the world Gulfstream added to its fleet of six private and business jet models with the presentation of the all-new G700 at the NBAA-BACE air show in Las Vegas, Nevada, USA.

The launch of the G700 is certainly an event as is the NBAA-BACE which over three days attracted some 23,000 aviation professionals from all over the world. Gulfstream’s G700 will carry up to 19 passengers and sleep 10.

In daylight passengers will be able to view the world through one of 20 panoramic oval windows, flying at an altitude of 15,545 metres [51,000 feet], a commercial airliner will fly at a far lower altitude in fact and have a cabin pressure far low than the G700.

Passengers in the G700 will experience at 15,545 metres a cabin pressure equivalent to 1,478. Besides the lowest cabin altitude the cabin is ‘whisper-quiet’ and filled with fresh air. The lighting on board is also designed to promote a healthy experience with the lighting system that mimics the circadian rhythm from sunrise to sunset, further enhancing the flight experience.

Leaving aside the flight deck, and concentrating on the cabin the G700 boats the tallest, widest and longest cabin in the industry.

With up to five living areas, option an ultra galley with a passenger lounge or a crew compartment, a six-place dining room that doubles up as a conference room, even a master suite with en-suite bathroom and shower, two windows and even a wardrobe.  Gulfstream would and do argue that the G700 is the new Gulfstream Flagship perhaps also of the industry.

Gulfstream has built 2,850 jets since the company was founded in 1957, supported globally with specialised aviation engineers focused on keeping the airframes flying, on demand.

At that time named the Grumman Aircraft Engineering Co, the first Gulfstream design was so named because so many of the Grumman executives holidayed in Florida where the oceanic Gulf Stream flows northward along the coast before heading off across the Atlantic to warm the shores of north west Europe.

Many a Gulfstream is in the service of heads of state as well as being configured for special missions such as medical evacuation and high altitude atmospheric research.

Gulfstream have stuck with their known strengths found within the Gulfstream fleet; ultra long range high speed and performance combined with flight deck innovation and a cabin which offers customers an unprecedented experience. With a reported price tag of US$75 million each; deliveries start in 2022.