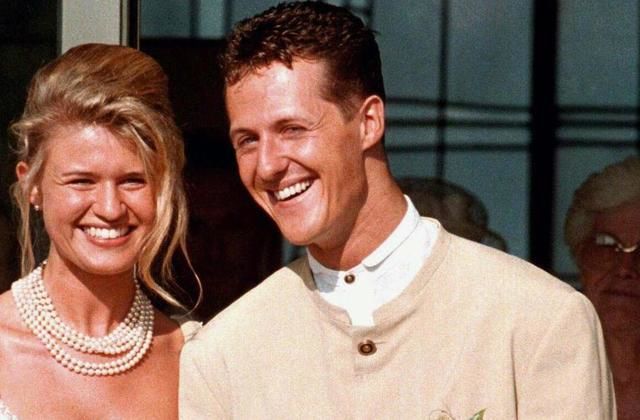 The wife of Formula 1 hero Michael Schumacher has paid tribute to her husband in her first interview since a skiing accident which left him permanently disabled.

The family have preferred to keep the tragedy to themselves and little is known about Schumacher’s condition – he has not been seen in public since the accident as he resides with 24 hour care in his plush Swiss home beside a beautiful lake.

Corinna Schumacher, 50, and daughter Gina Maria, 22 have now revealed one way they cope with the cruel twist of fate life has dealt them is working with horses – something they are able to do thanks to a generous gift imparted on them by Michael when he was well.

Lovely Corinna spoke for the first time of a ranch in Givrins her husband bought for their 10th wedding anniversary – which lead to her having a passion for horses.

She said “I don’t forget who I have to thank for this. That would be my husband Michael.

“When I was 30 and I dreamt of having a horse, he flew me down to Dubai in order to look at an Arabian horse.”

Corinna actually developed a natural talent for equestrian competing and she became the European champion in Western-style horse riding in 2010.

The couple’s daughter Gina, has also developed the same skills as her mother, and she is a gold medalist in the Reining European Championship in Givrins.

Daughter Gina  has revealed some wise advice given to her by dad Michael when she began competing.

Michael told her “When you drive a car, you can stick it in the garage afterwards. But a horse needs to be looked after all the time, even on Sundays.”

The family now has 40 horses and ranches in Switzerland and Texas and Corinna admitted she feels joy at the success Gina has achieved.

She said: “I feel the greatest pride when I see Gina. What she has already achieved and how much fun she is – that makes me happy.”

Michaels son called Mick Schumacher is a German racing driver, currently competing in the FIA Formula 2 Championship with Prema Theodore Racing and being affiliated to the Ferrari Driver Academy and hopes to follow in his great fathers footsteps.