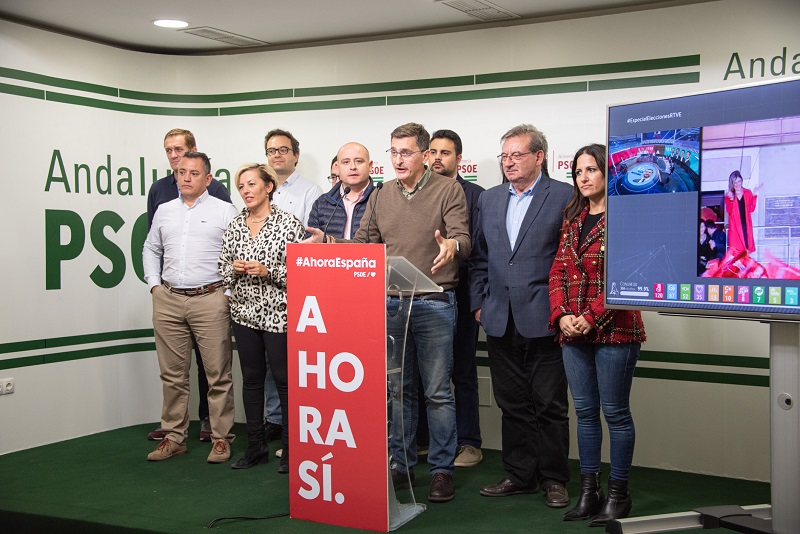 VOTE WINNERS: The left-leaning PSOE party gained a bigger share of the vote than the conservative PP and far-right Vox CREDIT: PSOE Almeria

SUNDAY’S general election produced a three-party draw in Almeria.
The left-leaning Partido Socialista (PSOE), the conservative Partido Popular (PP) and the far-right Vox all gained two seats in the Congress of Deputies.
In terms of vote share however, it was PSOE which just pipped the other two parties to victory.
The Socialists polled 88,425 votes in Almeria, representing 29.43 per cent of the total. This was pretty much the same result for PSOE as in the spring general election.
However, the Almeria results reflect the national picture of a significant shift to the right this time.
Vox did better than PP with 26.75 per cent, or 80,397 votes overall. This was a sizeable leap up from the 16.32 per cent, or 62,648, of Almerians who voted for the party on April 28.
The result gave Vox one more deputy than before and established it as the province’s second most important political force.
PP got 77,751 provincial votes (25.87 per cent), a notable improvement on the 73,952 the party won six and a half months ago.
The centrist Ciudadanos had a bad night. The party lost its one Almeria deputy after getting just 7.54 per cent with 22,645 votes. This was a massive drop from its 18.82 per cent share last time, when it won 56,268 votes.
The leftist Unidas Podemos (UP) remains without provincial representation in the national parliament, although the party did at least do better than Ciudadanos in Almeria. It gained 8.02 per cent of the votes cast, or 24,089. This was just slightly less than in April.
In the provincial vote for the Senate, PP and PSOE gain two members apiece.
Electorate turnout in the province for what was the fourth general election in four years was 65.88 per cent.