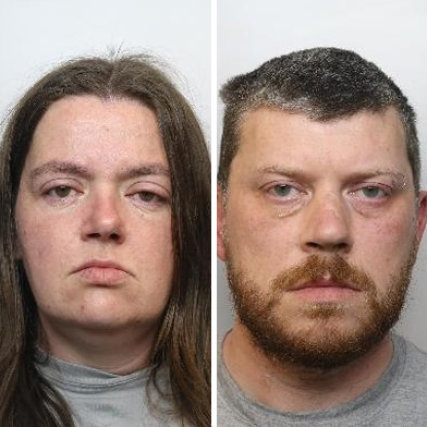 An incestuous couple who murdered two of their teenage sons and plotted to kill four more have been ordered by a judge that they will serve a minimum of 35 years behind bars.

Sarah Barrass, 35, and 39-year-old Brandon Machin, her half-brother and father to all six of her children, planned  between them to kill the youngsters in May 2019 scared their kids  would be taken into care.

The gruesome couple planned together to strangle their two eldest children – Tristan, 13, and Blake Barrass, 14 – before killing them by placing bin bags over their heads and suffocating them to their last breaths of life.

The court heard on Tuesday how two of the children that they had plotted to murder were under the age of three.

Prosecutors told how the surviving children have said they wanted their parents to go to prison for “300 years” and that one feared they might “become a murderer”. A totally filled public galley also heard how two of the children are “emotionally broken” by what happened and “repeatedly ask why and how?”.

A day before murdering Tristan and Blake on May 24, the gruesome parents  had also forced the two teenagers, as well as two more of their children, to take tablets at the family home in Sheffield.

A court heard on Tuesday how Barrass and Machin both expected the combination of tablets , which included prescribed ADHD medication, to kill all four of them.

But when that failed, they killed Tristan and Blake before trying to drown another child in the bath.

Sentencing the two to life jail-terms with a minimum term of 35 years, Mr Justice James Goss told Barrass: “You considered your love for them and fear of being parted from them entitled you to take their lives as well as your own.”

The pair had both admitted murdering Tristan and Blake, plotting to murder all six of the children and five counts of attempted murder, two of which were against the teenagers who died.

Prosecuting the case, Kama Melly QC told Sheffield Crown Court that, to the outside world, it appeared that Barrass and her children lived relatively ordinary lives.

“The picture of the Sarah Barrass household prior to the events in 2019 was, to the outside world, a household of a loving single mum with six children, heavily supported by her brother Brandon Machin,” she said.

“In fact, unbeknown to everyone but the defendants, Brandon Machin was in a sexual relationship with his half-sister, Sarah Barrass, and he was the father of all six children.

“The children believed and even told officers at the scene that their father was dead, he having died in the Second World War.”

She said it was “clear that the relationship between the two defendants was of a consensual sexual relationship”, adding that friends and relatives described Machin as a “pushover” and said that Barrass “definitely wore the trousers”.