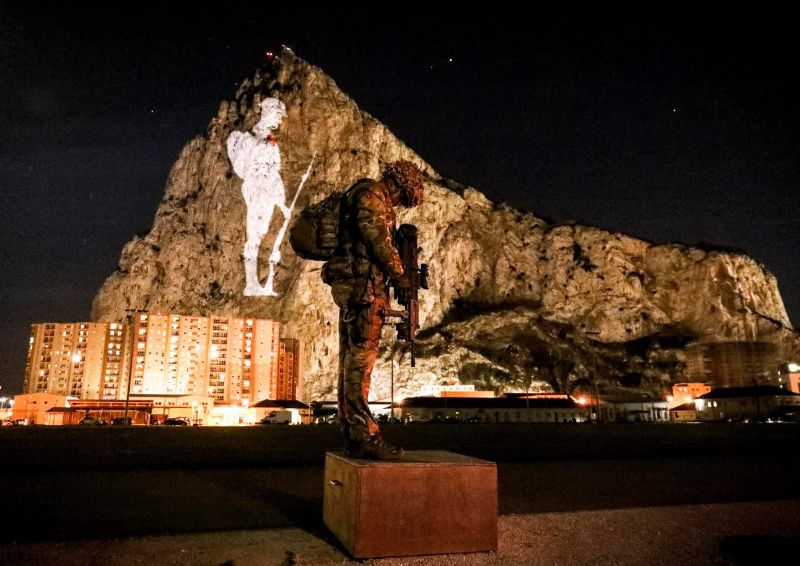 Reversed arms in honour of the dead Credit: BFBS Facebook

THIS year’s Remembrance Day Service in Gibraltar was particularly poignant for a number of reasons, especially as for the first time, a representative of the Territory was invited to the Cenotaph to lay a wreath on behalf of Gibraltar.

Prior to this, the traditional annual poppy football match took place at Victoria Stadium on November 9 where veterans Prince of Wales beat Britannia 5 – 4.

There are three services in Gibraltar on Remembrance Sunday, the first at the Parliament Building where the Governor, members of Government, religious leaders and representatives of the community lay wreaths to celebrate Armistice Day.

Then the next is held at the British War Memorial followed by the third at the American War Memorial.

Members of the Armed Forces based in Gibraltar were joined by members of the Royal Gibraltar Defence Force as well as veterans who live on the Rock and many who travel in from Spain.

Others who attended included those still alive who were evacuated to Jamaica, Madeira and the UK as Gibraltar became a fortress during the Second World War.

One notable visitor was HRH Princess Michael of Kent who although on private visit was invited to lay her own wreath.

The Rock was an ideal backdrop for a symbol of a single soldier reversing arms in honour of those who have passed beyond.

For so many years, Gibraltar has been associated with all areas of the Armed Forces as well as Merchant Navy and the airport is still under the control of the Ministry of Defence.