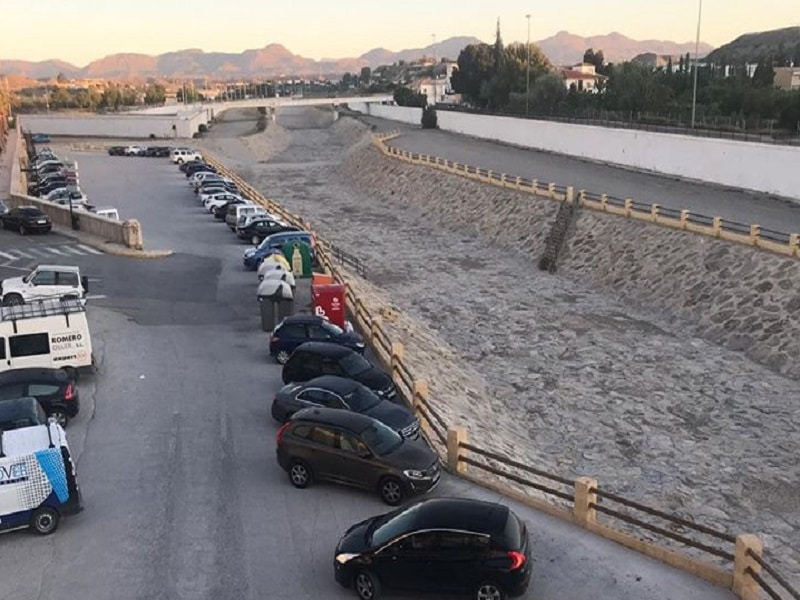 ALBOX council has held talks with the Junta de Andalucia to try and reach an agreement on the future of the concrete surface the local authority put down on a section of the rambla.
The council decided to go ahead with concrete surfacing on a side of the rambla going through the town in response to what Albox Mayor Francisco Torrecillas (Union of Independent Citizens), maintained in a post on social media was residents’ justified demand “for reasons of health, comfort and safety to secure the stones above the central channel.”
However the regional government’s Environment and Land Planning Territorial Delegation declared it was illegal on the basis the works lacked the proper authorisation and demanded the rambla is returned to its natural condition
The arrival of diggers on Friday November 8 to start removing the concrete prompted a spontaneous protest by local residents.
Dozens of people gathered at the side of this area of the rambla and parked their cars to prevent the diggers from gaining access, leading to the arrival of the Guardia Civil.
In the end the diggers went away, and on the Saturday Torrecillas ordered the suspension of the concrete destruction.
Speaking on local Spanish radio, the Mayor explained he had received notification residents were planning another demonstration on what was the day of reflection before the general election vote on Sunday and he had therefore decided to order the removal of the diggers to “guarantee calm.
At the same time he said he sent messages to “all the Popular Party authorities” to try and restart negotiations on the issue. The Junta’s Agriculture, Fishing and Sustainable Development Almeria delegate Aranzazu Martin Moya got in contact and on the Monday Torrecilas and the Town Hall Secretary met with the delegate to look at how the situation could be resolved.
According to the Albox Mayor there are several other examples in the province where local authorities have put down concrete or similar in ramblas going through their municipalities, among them Roquetas de Mar, Macael, Adra and Pulpi; in the latter there is nearly three kilometres of concreting he said.
Torrecillas also maintained that these municipalities had not requested permission from the Andalucia regional government before carrying out the works.
In the radio interview he stuck to his argument that the concrete surface “does not accelerate the passage of water”, as the Delegation states. Also that the works are necessary to prevent the stones in the rambla’s upper drainage channel from being dragged down in the event of the water level rising, with the risk this could represent “in a ramble which is so close to the town’s main street.”