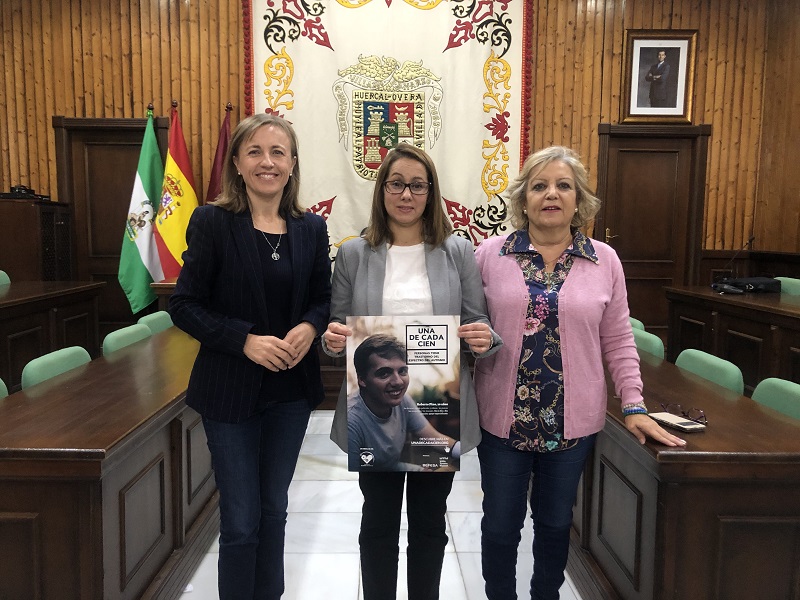 OBJECTIVE: The campaign is aimed at giving the public a better understanding of Autism Spectrum Disorder. CREDIT: Ayuntamiento de Huercal-Overa

HUERCAL-OVERA council has given its support to an Andalucia Autism Federation campaign to raise awareness about the condition.
This week the local authority hosted the presentation of the ‘Una de Cada Cien’ (One in every 100) campaign aimed at making people more knowledgeable about the Autism Spectrum Disorder (ASD).
Among those attending the act to present the campaign information materials, website and video were Huercal-Overa Mayor Francisca Lourdes Fernandez, Deputy Mayor and Well-being councillor Maria del Mar Meca, and Monica Lopez, the president of the ASTEA Almería Association, which is a member of the Andalucia Autism Federation.
The Mayor highlighted the importance of inclusion for people with ASD, commenting that to achieve this “we all have to work and collaborate: associations, administrations and the public.”
Fernandez also revealed the council is now working on a project to adapt a municipal premises which it will hand over to ASTEA in order that they can continue with their work and develop the different programmes which the association puts into action.
At the same time, she said, the council would aim to make local authority-organised activities more inclusive so they include people with ASD.
The ASTEA president expressed the association’s gratitude to the council for it support.
Monica Lopez stressed the new campaign’s main objective was for people to better understand ASD, pointing out that ignorance of the disorder “produces a little bit of rejection and the creation of false myths.”
The campaign is already being promoted on Huercal-Overa municipal screens and on the council’s website.