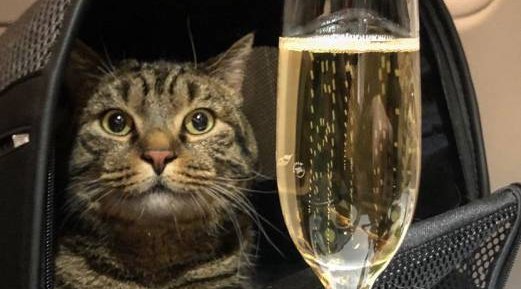 Indignant cat lovers the world over have their claws out for Russian airline Aeroflot for punishing an overweight moggy’s owner for sneaking him onto a flight last week.

Mikhail Galin, 34, sneaked his cat Viktor onto the flight by borrowing a similar, slimmer cat to check in instead, before swapping the cats back, so that Viktor flew with his owner on the flight in business class.

Mr Galin did this to get around Aeroflot’s on-board weight limit for pets which is 8kg or 17.6lb. Viktor was 2kg or 4.5lb over.

He later told Russian state TV: “My cat is not fat. He just has heavy bones.”

When the airline found out, it stripped Mr Galin off his 370,000 airmiles, and also removed him from its frequent flyer programme.

Since then, Aeroflot has faced a barrage of criticism on Russian social media, including hundreds of memes of solidarity that translate as ‘Je Suis Fat Cat.’

AK Vars bank in Vladivostok called the treatment of the cat and its owner ‘unfair and insulting,’ and offered Galin a new bank credit card with 10,000 frequent flier miles on it.

But the main backlash has been from Viktor’s new online fan base of Russian cat lovers who now have their claws out for the national airline.

Thousands of supporters have used Twitter and Instagram to display memes parodying the airline, including many with doctored photos of cats wearing Aeroflot logos, and trending hashtags like ‘FlyVictor’, ‘I/We are fat cat’, and ‘Bro is not luggage’.

One reads: ‘Today Aeroflot is after the fat cat, tomorrow it might be after you.’

Online news media have reader polls, with most coming out in favour of cutting the cat some slack and lightening on the weight rules.

Kremlin spokesman Dmitry Peskov was even asked about the cat controversy while with President Vladimir Putin at a political forum in Brazil.

Mr Galin was on his way back home to Vladivostok after a two-year job contract in the Latvian capital of Riga. He had booked the trip and wanted to bring Viktor with him.

He was offered a spot in the cargo section, but Mr Galin said his cat would not survive the eight hour flight, and his death would haunt the agent forever in her “nightmares.” The journey from Moscow to Vladisvostok is 9000km.

After Aeroflot refused to let Viktor fly, Mr Galin posted on Facebook for a similar, slimmer cat, and when he found a suitable candidate, a cat named Phoebe, he returned to the airport to try again.

Mr Galin accepts his punishment but said that if faced with the same situation again, he would probably do the same again, although he admits posting on Facebook was a mistake.