Glimpse of the Interior of Aston Martin’s DBX 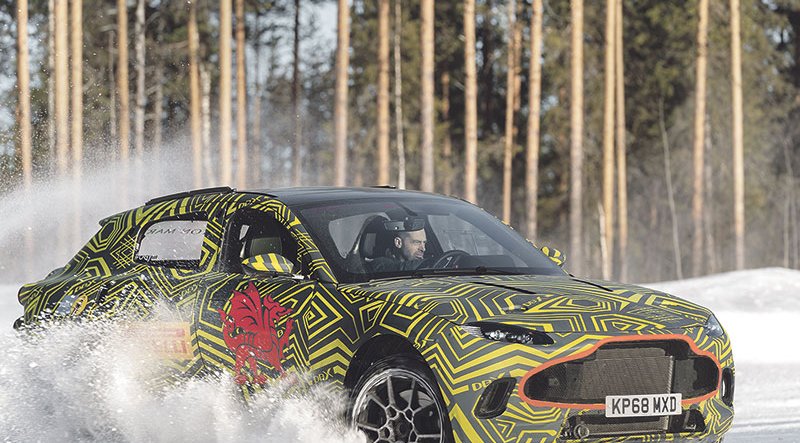 Into a crowded some say saturated market Aston Martin will launch its first Sports Utility Vehicle. The launch will be on November 20, 2019 in Beijing, China.

The launch price of the SUV by the British marque has been confirmed at €193,500 placing the SUV well into the luxury bracket of on-road or indeed off-road vehicles. As the DBX is an Aston Martin the emphasis is on the Sport of  the SUV.

The wheel base; the distance between the front pair and the rear pair, is set to permit the design team to maintain a low and sleek profile while expanding the interior volume of the cabin. More than six months of the design team’s time was spent refining the driver’s position within the SUV.

The seating position delivers a clear view of the bonnet to give confidence when manoeuvring in tight positions with cars. The objective, to offer a cabin that gives the driver an instant and relaxed confidence and offering a promise of dynamic performance as well as clear lines of sight.

Moving from the driver’s seat to a dashboard which accentuates the sense of space and luxury. Each button and dial has been positioned with care and following extensive testing to achieve the aim of instant familiarity.

The TFT screens are seamlessly integrated in the broad sweep of the dashboard despite their size they do not overwhelm the elegant sweep of the interior.

How to keep valuable close to hand and yet clean and safe in an SUV exercised the design team too. Their solution, a bridged centre console provides a space that will accept a large 1.5-litre bottle or a precious handbag; neither of which would benefit from rolling about on the possibly muddy floor.

The passengers have been a central concern of the design team from the outset. The brief was to achieve an inclusive feeling, not to have the passengers feel that they were leaning over those in the front seats of the SUV.

Smaller people children were also brought in to the picture with a group of children sharing their experiences and views of entering and leaving an ergonomic assessment test article at the company’s design studio.

The DBX is being built at a brand new and dedicated factory in Wales. A hand crafted cabin, the use of luxury materials and carefully considered ergonomics. Add a full length panoramic glass roof and expansive side windows, a sports car package and off-road ventures find a sense of light and expansive views of the world you are exploring.

No doubt Aston Martin will be talking more about the power plant at the reveal in Beijing , the preview of the interior that will carry you promises much.