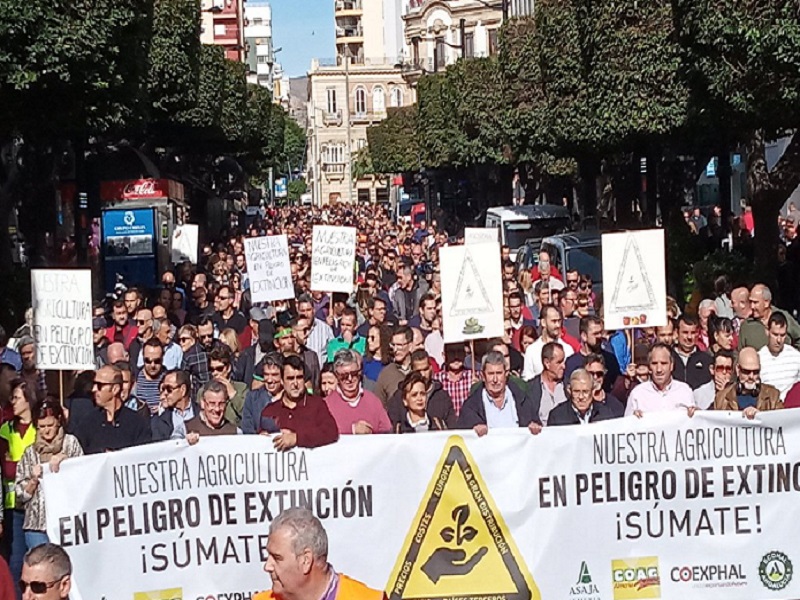 THOUSANDS OF Almeria fruit and vegetable producers took to the streets of the provincial capital on Tuesday morning to protest over what they say are major threats to the Andalucia agri-food sector.
Responding to calls from the UPA, Asaja, Coag, COEXPHAL and ECOHAL agricultural organisations, the action by what the ASAJA young farmers association claimed was 20,000 provincial protestors, coincided with demonstrations in Motril in Granada and Torre del Mar in Malaga.
Among those joining the demonstration in Almeria city was the national leader of the far-right Voz party Sanitago Abascal.
The protestors marched under the slogan ‘Our agriculture in danger of extinction’ prompted by what they maintain is a lack of balance in the market.
The Andalucia agri-food sector puts the blame on several factors, among them what they argue is a market with an unequal playing field for producers in European Union countries, where fiscal, environmental, social and salary costs are much higher than for producers outside the EU.
The regional agri-food sector cites issues like the low profitability of small and medium sized operations and the imminent risk of the disappearance of important crops.
In Almeria the protestors’ march started off at the Las Almadrabillas plaza in the city centre, going down the Avenida Federico Garcia Lorca, the Rambla Obispo Orber and the Paseo de Almería before ending up in Plaza Emilio Perez.