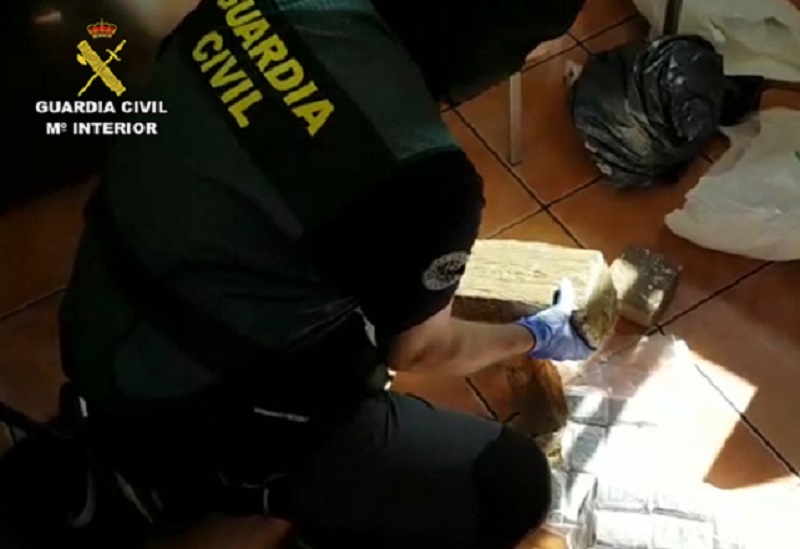 RESULT: Raids on four properties led to the seizure of more than 3,000 kilos of hashish and 300 grammes of cocaine. CREDIT: Guardia Civil Almeria

THE leaders of a family clan accused of smuggling hashish into the province on fishing boats are behind bars.
The Almeria Guardia Civil reported that, working in collaboration with the Organised Crime Unit based in Alicante, it had busted one of the most active criminal organisations dedicated to this kind of crime.
The authorities launched Operation Carbotage back in February to investigate the illegal transport of drugs from Morocco in small fishing boats to fishing ports on Almeria coast.
The drugs would be stored in a safe place for subsequent distribution to third countries and, to a lesser extent, elsewhere in Spain.
According to the Guardian, the arrested individuals were highly experienced operators making investigations into their activities more complicated. However, the participation of the specialised Guardia Cviil units using the latest technology meant the investigation came to a successful conclusion.
In the final phase of the operation at the end of October, the Guardia raided four properties and made 13 arrests, six of them members of the same family. They also found more than 3,000 kilos of hashish, 300 grammes of cocaine, marijuana, MDMA, materials used for preparing drugs for sale, €55,000 in cash and arms.
A number of fishing boats were seized during the operation, including one off the coast of Murcia which led to the arrest of three individuals and the apprehension of 1,000 kilos of