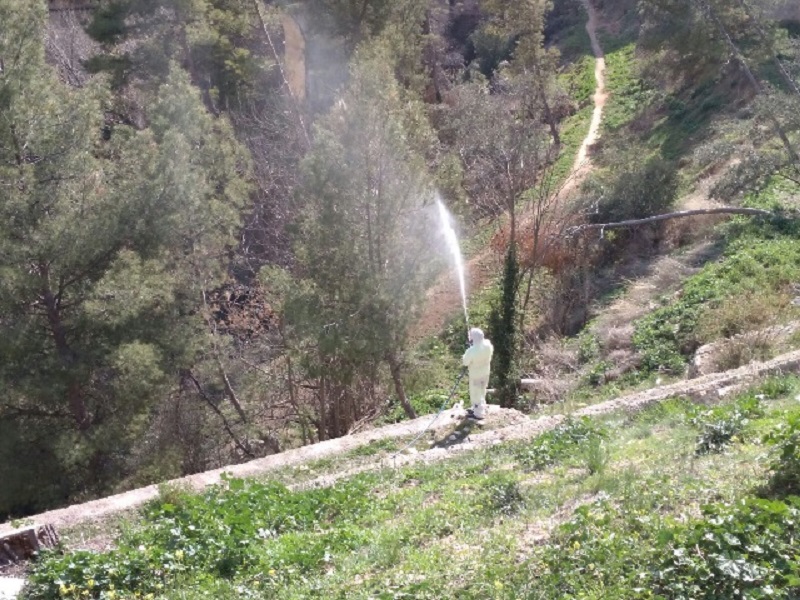 TREATMENTS: Areas of pine trees have been sprayed with biological insecticides. CREDIT: Ayuntamiento to Alcoy

Alcoy council is taking action against processionary caterpillars.
The local authority has been using biological control methods in the areas of the municipality where the caterpillars are found, putting down traps and taking preventing steps like spraying.
Throughout the summer, 34 traps were placed in different locations to trap the males. The result was the capture of 287.
As the council pointed out, given that for each male trapped this prevents between 500 and 1,000 larva, this adds up to stopping the appearance of more than 200,000 more caterpillars.
In addition, in the last week of October and in November, 29 zones with pine trees have been treated.
Tree tops have been sprayed with biological insecticides of low toxicity to humans, birds and mammals. In addition, active insecticides have been injected into pine tree trunks in order that this is transferred to the leaves. Hence when caterpillars chomp on the leaves it kills them.
Among the areas which have been treated are the San Roque, Santa Ana and San Vicente Paul schools, the Joan Canto Music and Dance Conservatory, a number of parks and green areas, municipal sports centres and swimming pools, the municipal fairground, several streets and plazas and the cemetery.
Public Works and Services councillor Jordi Martínez said the caterpillar prevention campaign had focused on the areas used by large numbers of people, also taking into account requests from local residents.
The council pointed out there are outbreaks of processionary caterpillars every year in Alcoy due to the favourable climatic conditions for their development, hence actions against them have to be taken continuously, employing different techniques.