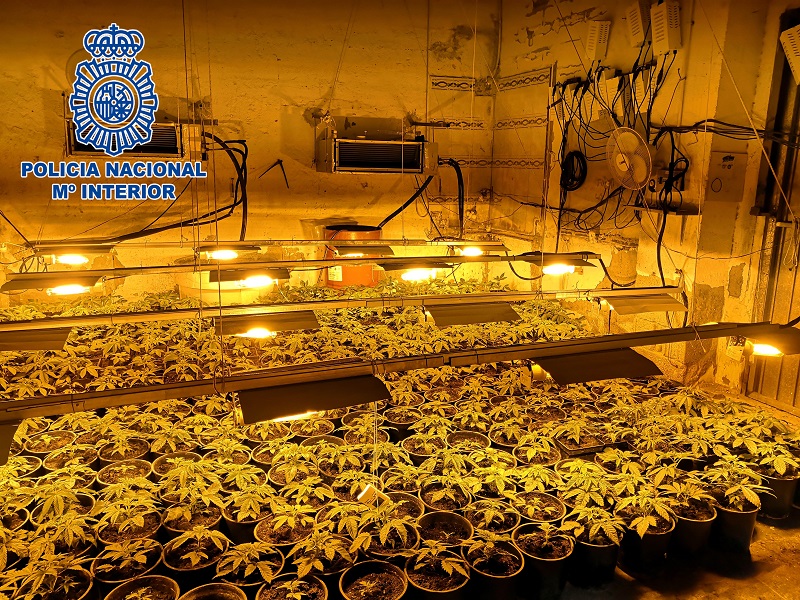 GIVEAWAYS: Air-conditioning units running 24-hours a day and a strong smell of marijuana pointed to the obvious conclusion there was a marijuana plantation. CREDIT: Policia Nacional Almeria

POLICE have located yet another illegal marijuana plantation in Almeria.
This time investigations resulted in the discovery of 423 marijuana plants growing at a rural property in the Alquian district, resulting in one arrest for a crime against public health and for defrauding the power supply.
Police first opened investigations in August into the property, which was used for the storage of farming implements and animal breeding. Investigators noted that there were a number of air-conditioning units mounted on the side of one of the constructions which were running 24-hours a day, plus there was a strong smell of marijuana in the area.
Surveillance activities and keeping a track on the now detained individual confirmed the first suspicions that he was going there daily to tend to the plants.
Having acquired a search warrant officers carried out a search of the property as well as the detainee’s home in the Pescaderia neighbourhood of Almeria city, which he shared with his wife and two children.
As well as the marijuana plants, they seized 43 electricity transformers, 44 lamps, 105 600 watt bulbs, five extractors and for air filters, among other items.
Police also came across bank books and receipts pointing to the payments made for the purchase of the land on which the marijuana plantation was located having been obtained illegally from profits from previous crops.