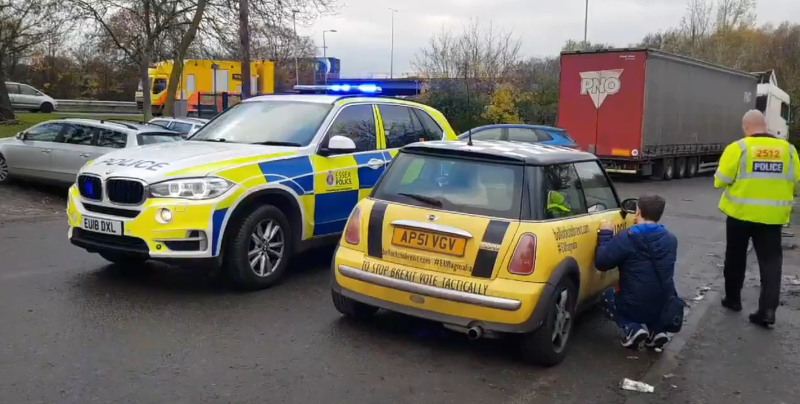 A GROUP opposed to Brexit in the UK had their phrase “Bollocks to Brexit” adopted by then Liberal Democrat leader Vince Cable but they have been campaigning against leaving the EU since 2016.

Currently they have a bright yellow bus with the words emblazoned on the side and three mini cars which are touring the UK trying to turn up wherever pro Brexit campaigners such as Jacob Rees Mogg have been due to appear.

Last Sunday one of the cars was stopped by Essex Police on the M25 near Brentwood and the driver asserts that he was shouted at and bullied by the officer involved and accused of a public order offence.

A passenger in the car Peter Cook said that they were told to remove the offending letters from the side of the car whilst it was stopped on the hard shoulder of the busy M25 and it was only after he dialled 999 to complain that the officer was putting their life in jeopardy that they were escorted to the nearest service station.

Once parked, they removed the offending b and o of the phrase so that the sign then read “locks to Brexit” at which time they were allowed to continue on their journey.

The pair who recorded the actions of the officer whilst they were parked in the service station have said that they intend to make a formal approach to the Police Complaints Commission especially as the word was declared as being not obscene in judgement handed down in Nottingham Magistrate’s Court in 1977 with regards to the Sex Pistols first album.